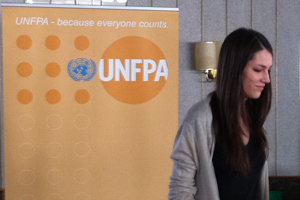 Piletic was originally drawn to American because of its international focus, diversity, and tolerant spirit. She also valued that the university encouraged students to learn as much outside of the classroom as inside— whether on campus, in D.C., or, for Piletic, studying abroad in Rome. Piletic made the most of these opportunities with the help of the Maria Mihajlov Ivusic Scholarship. The endowed scholarship, established generously by Maria Mihajlov Ivusic, CAS/MA ’69, and her husband, Christopher Ivusic, is awarded annually to undergraduate students from the former Yugoslavia. Piletic shares, “I received the Maria Mihajlov Ivusic Scholarship at a time when I most needed it. Being an undergraduate international student in the U.S. was very daunting, so I was extremely fortunate to have received this scholarship.”

After receiving such meaningful assistance herself, Piletic is now demonstrating her enthusiasm about giving back to her community in Serbia. Her dedication enables her to touch lives of others, who may one day return her good deeds by working to promote equality in their communities.