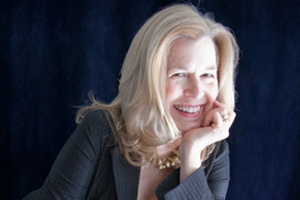 Indian Voices takes readers on a journey into the lives of Native Americans from 16 different tribal nations. The author’s success with her first book, Frauen (1995), and a subsequent book, Hey Waitress! (2004), has only increased attention focused on her newest work.

Owings says that she has wanted to write books since she was 10 years old and has always had an interest in writing about people who are overlooked and stereotyped. When asked what she enjoys most about writing, Owings says, “In terms of non-fiction, forming the various elements from the interviews and my observations into a coherent and I hope compelling narrative.” She adds, “There is the aftermath too. It is a tremendous feeling when a reader tells me how a book of mine changed the way she or he thought about a subject or a people. Or, when a fellow writer is moved. One recent high was Louise Erdrich’s embracing me and shouting, ‘I LOVE your book.’”

As for how her education helped her to her goal of being an author, Owings says, “I majored in journalism, with the great Harry Lee as one of my professors. In a sense, he taught common sense, how to write cleanly and clearly. At the time, I was not planning to write books, but the journalism lessons I learned at AU helped me once I changed from writing television news to writing books.”

Owings admits that while she loves writing, the process of publishing a book is very difficult. The most difficult part of the book writing process is, according to Owings, “Time and money. Each of my books took seven years or more, in part because I had to work at least part time. And I am very thorough, double checking the transcript from every interview against a replay of the audio. But the writing itself I love. The many, many rewrites, I actually love too. I think I wrote 21 versions of the Introduction to Frauen before I was happy with it.” Oh, yes, and I tend to write long, or longer than the contract stipulated, and then I have to spend much time and energy slashing.”

When asked what advice she would give to those interested in writing and publishing their own books, Owings says that is not yet a fan of self-publishing. “So my advice for other writers is to weigh the pros and cons of self-publishing before moving in that direction. One could do something ‘techy’ and trendy online, but otherwise, the stigma is still in self-publishing, including among reviewers. And some self-published books are horrible, so that does nobody any good.”

Owings plans to write more books, but is unsure where she sees herself 10 years from now. But she hopes the answer involves wrestling the alphabet into new forms.