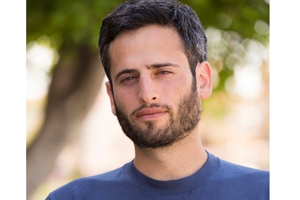 "I've learned a lot in a short amount of time. I've been lost in the realities of film," Brian Levin, SOC/MA '04, says of his first film, Flock of Dudes, which is set to release in early 2014. This is his first feature-length film, and he says that the process has been an opportunity to put everything he has learned into one work. It has also taken more time than any past project. From the initial idea to make this film until now, Brian reveals that over five years have passed.

The inspiration for the film came from a lot of personal experiences, and Brian thinks they are experiences to which many people will be able to relate. He says, "There's something about the experiences people go through in that time of life; it's a funny and emotional time."

Now that the film is in post-production, Brian is looking forward to his next projects, some of which he hopes to bring to Washington, D.C. Having grown up in Maryland, Brian has spent a lot of time around the area; he says that there is a special look and feel to D.C. that he hopes to capture on camera. To add to the effect, he hopes to find a cast from around Washington for his next project, which he reveals will be a throwback comedy in the vein of films like The Naked Gun. He expounds, "I'm excited to be making these movies and bringing them back to the area."

However, Brian wasn't always sure that he wanted to go into film. He entered college at Towson University as a mass communications and advertising major interested in commercials. He always loved movies, but film had been merely a hobby for him until he got to college, when he realized that film was where he wanted to make a career.

There are many aspects of filming, but Brian explains, "I felt pulled more and more toward screen writing as a specialization, then toward producing." To current students, he gives the advice that to succeed you need "persistence, seeing it through to advance in whatever you're doing." And, as it relates to film, he says, "try to be creative every day."

Brian encourages students, saying "take advantage of the fact that you have all this time and these resources." He adds, "AU was a great place for me, to have the tools, teachers, and flexibility to discover what I wanted to do professionally."