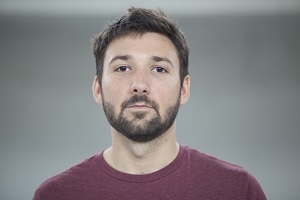 From the outside looking in, it is easy to say that Eric Rohter, CAS/BA ’08, is on top of the world. Currently associate director and partner at ANTI Bergen, one on Norway’s leading creative agencies, Eric was recently honored with the global Art Director’s Club “Young Guns” award for his body of creative work. The international portfolio competition identifies “the brightest young professionals across a multitude of creative disciplines.” The honor places him among the ranks of the world’s top designers.

“To be honored by the Art Director’s Club with this award is a huge achievement in the creative industry,” Eric says. “It is an honor to join the ranks of other world-renowned designers who have gone on to become some of the most influential creatives in our industry on a global level.”

“My advisors, Chemi Montes and Kate Resnick, always offered great support and help in the classroom environment, but also outside of class and office hours. They helped me prepare for job interviews and advised on career decisions,” says Eric. During his last two years at AU, he got involved with the AU Graphic Design Club and ran a program that taught children audio engineering and graphic design.

The “Young Guns” award is just one of many honors that this graphic artist has received. However, the best of Eric Rohter’s days are still to come. He hopes to travel to New York and DC more often in the future, helping his firm expand their reach to the United States. Currently the firm works with several international brands, including Nike, Converse, Pepsi, and MTV.

“I’m lucky enough to love what I do, which is a blessing and a curse. As creative problem solvers, our brains never turn off,”Rohter says. “I think it make’s life just a little more interesting.”