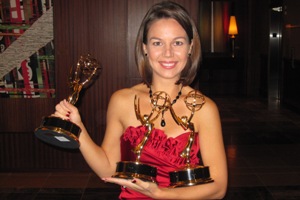 For most, winning four Emmy awards would be an impressive accomplishment for a lifetime of work, but AU alumna Janet Rodriguez, SOC/BA ’06, has earned a lifetime’s worth of Emmys in a mere two years and shows no signs of slowing down. Working for the Phoenix affiliate of Telemundo, the world’s second-largest producer of Spanish-language television programming, Rodriguez has won regional Rocky Mountain Emmy awards for her intrepid reporting on local issues.

Rodriguez, a native of Cuba, has not always lived in a country where hard-hitting investigative journalism was rewarded. Her family emigrated from Cuba to Miami when she was 12 years old. “[In Cuba], journalism was government-owned and oriented and not free, and that’s what I grew up knowing. When I came to this country… I was amazed at the many TV channels and newscasts and how free the press was. I was so intrigued that you could say anything, that you could report on anything… and tell people what is going on in the world. ”

At age 15, Rodriguez got a jump-start on her journalism career with her own weekly public affairs interview show on ABC Radio Disney. When she came to AU, Rodriguez knew broadcast journalism was her calling. During her final semester, she interned for Telemundo’s D.C. affiliate. Recognizing her talent and dedication, Telemundo DC hired her as a reporter immediately after she graduated.

After a year and a half in D.C., KTAZ Telemundo Phoenix offered Rodriguez a position as an on-air reporter. Eager to report for the eighth largest Spanish media outlet, she bought a one-way airline ticket to Arizona.

The recent heated debate and around immigration and Arizona legislation restricting undocumented workers presented excellent reporting opportunities. In 2009, her first year in Phoenix, Rodriguez won a regional Emmy for a story on undocumented immigrants living in tent cities.  In 2010, Rodriguez won three more regional Emmys for reporting on law enforcement and immigration, including a story about a prison hunger strike where Rodriguez was the only journalist to get inside and interview inmates.  She regularly contributes to Telemundo’s national newscast and was on NBC Nightly News this past May, covering a local immigration protest.

Rodriguez credits her AU education for preparing her for the real world of reporting. Last February, KTAZ began requiring its journalists to be both on-air reporters as well as their own camerapersons. “[What I learned at AU] gave me the biggest advantage… to do what I do today… I was able to say, ‘I know how to do this. I shot footage in college; my professors critiqued me on it. They really taught me how to do it well.  I’m up for the challenge.’ It’s invaluable, the experience that I got at AU. That education got me where I am today.”