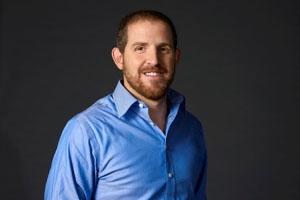 Jarrett Bellini, SOC/BA ’01, is applying his skills of humor and video production to create a popular weekly column on CNN.com, appropriately titled Apparently This Matters. From “The Lobster iPhone Case” to “The Puppy Room,” Jarrett offers humorous observations of some of the most obscure and unique treasures hidden within the internet. In order to find such distinctive material for his column, he says he spends a lot of time online, of course, but has specific sites he frequents to search for ideas that are both “relevant and ridiculous.”

In addition to his weekly column, Bellini is using his degree in visual media as a senior producer for original video production on CNN.com. He credits this success mostly to his involvement on campus at AU, including writing for The Eagle and performing with AU’s Mission: IMPROV-able, the university’s own improv troupe. Jarrett says extracurricular activities helped develop his unique form of writing and comedic talent. When asked what prompted the specific path of humorist writing he amiably said, “CNN has some of the best political and international journalists on the planet, but I’m not one of them. This is how I contribute. I don’t know how to write without using humor.”

Although he is now entering his ninth year at CNN, Bellini clearly remembers walking through the door on his first day as a young video journalist, determined to one day write and produce for the major news organization. It took eight years of hard work but he has finally achieved this goal, and he hopes to stay right where he is for nine more years.

His advice to current students hoping for similar success is to “get involved with any of the media outlets offered at AU; the newspaper, the radio, and the TV station. It is a small school so students are able to have more responsibility and creativity to find their own voice and build their own work. And most importantly, stay on top of technology because it changes almost every hour.”