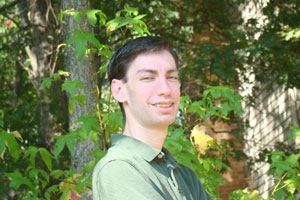 In the world of test preparation, companies like Kaplan and Princeton Review may come to mind, but alumnus Jeffrey Glazer, SPA/BA ’99, and his wife, Bernadette Chimner, SIS/BA ’99, have brought their test preparation expertise to Washington, D.C. with Griffon Preparation Services.

Glazer and his wife both worked for three national test preparation companies before deciding to open Griffon Prep in 2005.

“We wanted to be entrepreneurial,” he says. “There was not much room to move up and we had reached the highest level as teachers.”

They also wanted the ability to set their own schedules and create their own curriculum from what they had seen when they took the tests themselves.

“I took the LSATs four times,” says Glazer. “I actually taught the GMAT before I took it, so I studied by teaching it for three years.”

Griffon Prep offers small class sizes, one-on-one instruction, and teachers who score at the highest level. He and his wife are no exception. Between the two of them, they have scored in the 99th percentile on the LSAT, GMAT, and GRE – and – Chimner has scored a perfect score on the LSAT twice!

“We have grown the company from nothing,” says Glazer. “We had 20 students in our first year and now the word is out and we have about 250 to 300 students a year.”

Even though neither of them took business classes when they were at AU, Glazer says his CLEG and political science majors and the classes he took helped him learn the type of logic that was on the test. His internship with the multinational lobbying group, McDermott International, which he found through the lobbying institute at AU helped with the business and marketing aspects of owning his own company.

During his time at AU, Glazer was chair of the AU Club Council (formerly the SCCC), a New Student Orientation leader, an RA, treasurer of his sophomore class, president of his junior class, a member of student government, a member of the pep band, and founder of the Mime Club. He says being a part of these organizations helped him learn budgeting, organization, and event planning, all of which have helped with the development of Griffon Prep.

“The tests are weighed heavily in admissions and we want people to prep and study early and take the tests seriously,” he says. “A good score can open all doors.”

In the next few years, Glazer and Chimner hope to start teaching SAT prep for area high school students and start offering services online. They also hope to relocate to a new office and eventually expand into other cities.