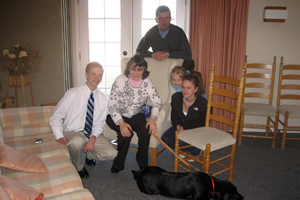 Kennedy and his children met Evelyne (center), in April 2009. The recipient of black labrador retriever Treasure, whom the Kennedys trained, met in Ottawa, exactly 30 years after he sustained a traumatic brain injury.

John F. Kennedy, SPA/MS ’96, has a big name to live up to—he’s heard the comments all his life. But his name isn’t all that makes an impression. After an accident at 12 years old that fractured his skull and required brain surgery left him unable to finish seventh grade, Kennedy later went on to start his own company, “I can help tbi [traumatic brain injury] LLC,” to help others who have experienced similar challenges.

Life was not easy for Kennedy after his accident. He struggled in school and suffered from anger issues and impulsive behavior.  Growing up during a time where resources for traumatic brain injuries were limited, Kennedy relied on family and friends to help him through and eventually earned a BS in marketing from the State University of New York at Plattsburg in 1991.

In fall 1993, Kennedy heard then-attorney general Janet Reno speak at AU. His interest in applying to SPA was piqued by the quality, high-profile speakers the school attracted. For Kennedy, AU was an exciting place to be and full of political activity. “American University is a very good reflection of who we are as a nation,” he said.

Because of his undergraduate grades, he was accepted provisionally into the justice, law, and society program. But AU took a chance on him, and he was strongly encouraged and supported by his SPA academic advisor, Linda Spicer. “Some students stand out as special and make it particularly rewarding to go the extra mile,” said Spicer, who still keeps in touch with Kennedy.

While at AU, Kennedy landed a job at the Community Police Consortium in Washington, D.C., a national initiative to train local police officers. He went on to work at Westat, a local government consulting company, for seven years before exploring different career options available to him.

Kennedy took advantage of the life-long career services offered to AU alumni.  After speaking with the alumni career advisor, he decided to try a new career path.   In January 2009, he founded “I can help tbi, LLC,” a consulting company that assists individuals and their families impacted by brain injury.  Owning his own company allows Kennedy to draw on his undergraduate degree in marketing to build and promote his business while specializing in personal organization, motivational speaking, and family development.

Kennedy sees this venture as an opportunity to help others who suffered accidental injuries as he did, and to serve injured soldiers from Iraq and Afghanistan.

On Nov. 9, 2009, Kennedy came back to AU to give back to another community—American’s.  He attended the SPA Alumni-Student Networking Reception to speak with his fellow alumni and current AU students about starting their own business.