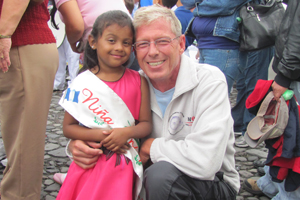 When alumnus John Bell, CAS/MEd ’83, took a summer job, he didn’t know it would change his life. Upon meeting gunshot victim Alex Gàlvez, Bell began a journey of friendship, education, and service which led to the creation of Transitions Foundation of Guatemala.

Bell’s career began in the DC Public School System and led him to AU for special education training, supported by the Department of Education. A member of a small cohort of graduate students, Bell taught during the day and took classes on nights and weekends. Bell recalls they were “trained as leaders, not teachers.”

While in Guatemala to volunteer and study Spanish, Bell met Galvez, who was dying from a paralyzing gunshot wound because he couldn’t get medical care. Returning to Washington, Bell utilized a network of people to obtain assistance for Galvez and personally assisted others.

By aiding Galvez, Bell thought he had reached his pinnacle. However, when Galvez shared news that others needed assistance, Bell knew a path of service awaited him. He and Galvez just created Transitions Foundation of Guatemala, which assists Guatemalans with disabilities.

Through a holistic approach, clients are supported through health and rehabilitation, education, spiritual development, leadership, social interaction, and employment opportunities. The Wheelchair Workshop and Prosthetic & Orthotics Programs are at the forefront of these initiatives. As the foundation’s mission grew beyond grassroots work, they found partnerships with Rotary International as well as engineering and design groups such as Designers without Borders, MIT, Cal Tech, and San Francisco State University, that support the wheelchair program.

Bell stresses their programs are a collaboration between disabled and non disabled, one member helping another. When you work within a family setting, he says, there’s a “higher accountability and respect” for the work that you’re doing . . . you drive yourself to do your best.”

While Galvez is the face of the organization, Bell is steadfast in his role as co-founder and directs operations and donor relations. Both travel on donor trips – requesting goods and funds – and share news of the violence and challenges faced in Guatemala. In July 2012, Galvez will speak before the UN Session on Arms Trade Treaties; he is recognized as a person who chose to help others as a result of his personal experience.

Looking back, Bell says, “AU gave [me] major tools and formation with higher level academics.” It was an environment that formalized his training. Bell maintains great respect for AU. And recalling his graduate cohort, he remembers “[we] were tight,” and camaraderie is reflected in his work in Guatemala.

Transitions Foundation of Guatemala has set a great example of a holistic approach to aiding the disabled and providing access to care for Guatemalans. Bell says, “In Guatemala, you see struggles, and it helps to keep your perspectives.” And for Bell, just one of those struggles introduced him to a life’s work in service to others.