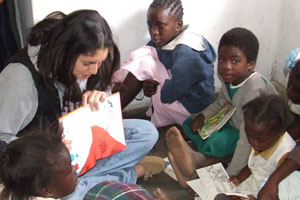 When Julie-Anne Savarit-Cosenza, SIS/BA ’08, came to AU she was already working on a major project. She was the co-founder of the African Education Program (AEP), a non-profit organization that seeks to empower youth in Kafue, Zambia, by providing them with an education.

Savarit-Cosenza founded the organization with two friends while they were still in high school, and with the help of their parents they were able to get the program off the ground.

“We took a year to get non-profit status, and we picked the community because our soccer coach was from there and his family is still there,” she says. “Originally we wanted to recycle gently used school materials so we did fundraising during our senior year and shipped a 20-foot container in May.”

After they shipped the supplies, Savarit-Cosenza and her co-founders received a grant to travel to Zambia. While they were there, they fell in love with the children and seeing more needs within the community, they decided they would help address those as well.

“They didn’t have a lab or a library, so in response to their needs we opened a youth center and a library,” she says.

Since then the organization has also donated computers, set up scholarship and feeding programs, and done HIV/AIDS awareness work in the community. Recently, AEP opened a boarding house.

“The biggest challenge is fundraising,” she says. “People took huge leaps of faith in us during the first few years when we had absolutely no results and just because the families knew us…We definitely have wonderful ideas and we are making a huge impact in the community.”

AEP has three permanent employees in Zambia and about five dedicated volunteers, in addition to high schools or other volunteer groups looking to help. Savarit-Cosenza goes to Zambia at least once a year and recently came back from a six month trip where she was working on program development.

While attending AU, Savarit-Cosenza used classes and her study abroad experience in Cape Town, South Africa, to help build an interest in the issues, aside from her work with AEP. One class in particular, Education for International Development, helped to further her interest.

“I was already interested in Africa but I saw my interest more in international policy,” she says. “The class really struck a chord and started my youth focus.”

For now, Savarit-Cosenza plans on continuing with her job in Washington, D.C. and working with AEP as much as she can to develop the youth center and work on other fundraising projects.

“Being in Africa with the kids and knowing that there is one HIV-positive student telling his friends he’s positive, that’s amazing,” she says. “The time we spend on the ground getting to stay with the students makes all the nitty gritty worth it.”