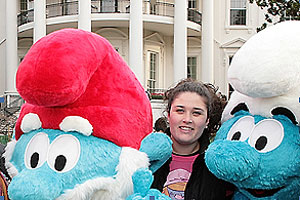 When Kate Hoffman, SOC/BA ’04, was admitted early decision to American University, she knew she loved the school, but she was undecided about her major.

Busy in- and outside of the classroom, Hoffman completed her first internship at a radio station near her hometown of Philadelphia after her sophomore year. She soaked up an Italian cinema class while studying abroad in Rome as a junior, and stayed in Washington that summer to work at local rock station, DC101.

It was at DC101, while planning events and working on promotions and advanced screenings, that Hoffman first learned about Allied, a full-service advertising agency and public relations firm that specialized the entertainment industry. In the spring of her senior year, she landed an internship there doing research, promotions, and event planning. She liked the work so much that she made it a goal to build her resume and get a full-time job there someday.

After graduation, Hoffman worked for Linda Roth Associates as a media coordinator handling publicity and promotions. She flourished in the role and moved quickly from administrative assistant to junior publicist to publicist in just two short years. Hoffman gained experience on a range of projects, including the National Cherry Blossom Festival in 2005 and the Larry King Cardiac Foundation Gala auction in 2006.

In 2006, Hoffman realized her goal and became a full-time publicist for Allied. She was promoted to senior publicist in November 2008. “My experiences at AU in public communication and film mirrored exactly what I am doing at Allied as a publicist in the entertainment industry,” she notes.

Hoffman says some particular events have really resonated with her, including a personal appearance event she covered in which Dwayne “The Rock” Johnson gave a screening of his film Gridiron Gang at Andrews Air Force base, for soldiers and their families who were wounded warriors from Walter Reed Hospital.

Another was in December 2009, when she was working with The Wizard of Oz at the Warner Theatre. The actress playing Dorothy came off of her National Tour to attend the opening of the newly renovated American History Museum, where she stood next to Colin Powell to sing, “Somewhere over the Rainbow.”

Hoffman continues to maintain strong ties with AU. She has been instrumental in hiring dozens of Eagle interns. Her sorority sister and recent AU graduate also joined the team as  the Columbia Pictures intern, and Hoffman's supervisor, the VP of Allied's Eastern Region for Publicity and Promotions, is an AU graduate as well. “AU provides you with a huge networking opportunity,” says Hoffman. “It’s everything they tell you it will be.”