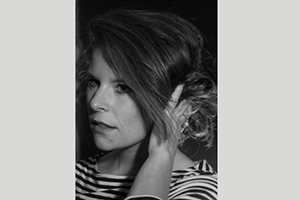 When she was in the Kingdom of Lesotho serving as a Peace Corps volunteer, Kelsey Marsh, SOC/MFA '15, knew that her next career move would be to head to graduate school and study documentary filmmaking. Kelsey spent her days working as a community health and economic development volunteer and a primary resource teacher, but she had her sights set on American University and was thrilled to learn of her acceptance while still in Lesotho.

As a student at AU, Kelsey says she was constantly busy. She made it a point during her tenure to avoid saying no to opportunities. In fact, she held three different jobs one semester (as a fellow at Center for Media and Social Impact, intern at Voice of America, and student worker at the Academic Support and Access Center), all in addition to being a full-time graduate student.

As a result of her reputation for working hard and getting the job done, Kelsey had the opportunity to work with Professor Brigid Maher on a film she was producing and directing, The Mama Sherpas. Kelsey credits this opportunity to AU's culture of blending theory with practicality and encouraging students to work in the field. In the case of The Mama Sherpas, Kelsey's involvement and responsibilities continued to grow, and she earned credit as an associate producer on the film.

Kelsey made every effort to emulate the experience she had working with Professor Maher as she produced and edited her own thesis film, NonCritical. The film, a short documentary about America's ambivalence toward finding missing black adults, earned Kelsey an invitation to the Diversity in Cannes Short Film Showcase, where she won the Jury Choice Award. As Kelsey said, "The majority of filmmakers participating were from USC's famed film school, and my success proved to me that AU students are on the same level and do belong in international filmmaking competitions."

Kelsey now works full-time at Maryland Public Television as an associate producer. She loves the excitement of the position and the fact that every day is a little different. Currently, Kelsey serves on the arts and culture team and works on two half hour shows, Chesapeake Collectibles and Artworks.

Kelsey also continues to freelance on many projects. She is currently producing a film called Women with Balls, about the D.C. Divas professional female, full-contact football team. The Divas had an undefeated season this year and just won their league's championship. Since the final game was played in Los Angeles, Kelsey was able to engage with three other American University alumni to help her with shooting the championship game.