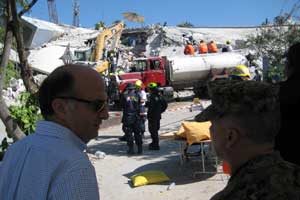 The U.S. Ambassador to Haiti, Kenneth Merten, SPA/MPA '86, would like to clear up a few misconceptions.

First, in the early days after the January 12 earthquake hit, "we kept seeing this breathless reporting about these people who haven't seen any aid yet," he says.

But Merten defends international relief efforts with the very real explanation that it's tough to get aid to people when the infrastructure before the quake was already lacking -- not to mention after a massive natural disaster that blocked many streets with trees, boulders, and large chunks of debris from fallen buildings.

"We didn't even know where many people were -- the only way to find them was to get in a vehicle and drive," he says… which required actually having or finding a working vehicle.

"It was very hard to get around, and honestly, the international community and Haitians, considering the infrastructure, did a really admirable job getting things out to the people."

Another misconception Merten wants to clear up: the media's obsession that Haitians were going to turn violent. "I don't understand that," says the ambassador whose job includes working with media from all over the world.

"The reality is, the Haitian people have behaved with tremendous grace and dignity. Most have lost everything they ever had. They've lined up peacefully for food, they're dealing with huge levels of uncertainty and a lot of personal loss, and I'm not sure how many other nations on the planet would deal as well. I've been very impressed with how well they've dealt with it."

A career foreign service officer, Merten considers himself tremendously fortunate to have been spared more earthquake damage than some broken glassware and waterlogged photos and books (from burst water pipes) when an estimated 50 percent of the homes on Haiti were flattened or made uninhabitable. He and his wife and two daughters, ages 13 and 17, were all in their Port-au-Prince house when the 'quake struck.

"You couldn't get your balance because the earth was shaking so much," he remembers. "I could see the brick and cement house shaking."

Merten has had colleagues living with him since his family was evacuated. "A lot of folks are doubled up," he says.

The ambassador meets regularly with the Haitian prime minister and other ministers, embassy officials, and colleagues from various NGOs and aid organizations. Much of his job is focused on triaging and troubleshooting crises, from medical evacuations to detained citizens and media errors he must correct and refute. Still, he says tremendous progress has been made since the tragedy that killed an estimated 230,000. "Things are slowly creeping back to normal," he says.

Although this is Merten's first post as an ambassador, it's his third tour in Haiti. During his first tour, in 1988-89, he was vice consul, handling immigrant and tourist visas. His second charge, from 1998-2000, was as economic consular, overseeing U.S. investments and encouraging those looking to invest in Haiti. In between those posts, he worked as a special advisor to the Clinton administration.

Ambassadorial posts typically last three years, and Merten began his appointment in August 2009, so he'll be in Haiti for a critical period of rebuilding over the coming years. "This embassy, I suspect, will grow significantly larger in terms of the agencies represented and the people here," he says, acknowledging his role in coordinating such efforts will keep his hands full.

Merten says he hopes fellow alumni and the entire AU community will not forget about Haiti as time passes and other stories dominate the news. "Haiti will need your help just as much in 6 or 12 months as it does now. They'll have different needs, but the need will still be there."