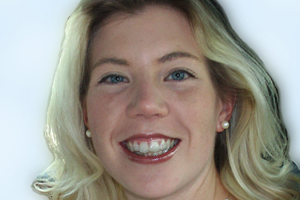 "Apparently there aren't that many people who are 27 years old and do corporate communications and take a company public," says Rebecca Andersen, KSB/BSBA '01.

But that's exactly what Andersen, corporate communications manager for New Jersey-based Opnext, Inc., helped do in early 2007, and her achievement did not go unnoticed. Before the year was out, PR News had named her a winner of its "15 to Watch" award, which honors budding public relations leaders and creative practitioners under 30.

What makes the feat even more impressive is that Andersen conducted the corporate communications aspect of the initial public offering almost entirely on her own; she has no direct employees and only works with an independent PR firm and contractors as needed.

"From the communications standpoint, I was it," she says. "I was given a heck of a lot of responsibility."

Taking responsibility has been characteristic of Andersen's young career. She has been with Opnext, a designer and manufacturer of fiber optic components, since she graduated from AU in 2001 with a degree in international marketing. Initially hired to manage the company's trade show program and its internal communications, within two years, she was "given the gamut," she says.

Now working from home in Alexandria, Va., Andersen oversees a $1.25 million budget and travels all over the world, spending about two weeks each month on the road.

In her "free time," Andersen also teaches in West Virginia University's integrated marketing master's program, which she completed in 2006 (while working full-time, of course), and gives back to AU students through the Public Relations Society of America, where she cochairs the PRSA university relations committee.