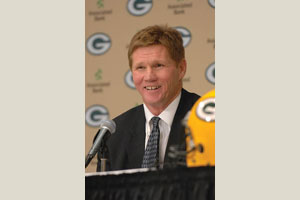 Thirty-plus years after embarking on an improbable NFL career, the upward journey for Mark Murphy, KSB/MBA ’83, might be finally over. There can’t be any perch loftier than the third floor office in the football shrine of Lambeau Field from which he runs one of the most celebrated teams in all of professional sports.

“This is a very special franchise,” says Murphy, president and CEO of the Green Bay Packers. “I’m going to do everything in my power to run it well and field competitive teams. You want to make sure that the brand is protected. You want people when they think of the Packers to think of small town America, working class values, an organization that’s run first class with dignity.”

Though undersized, Murphy always had a knack for the ball. At Colgate, he began to develop – physically and intellectually. An economics major with an eye toward the business world, he somehow found time to play baseball and football while prioritizing academics. By his junior year, pro scouts started noticing the powerful, 210-pound hitter.

After graduating, Murphy put a budding business career on hold to chase his NFL dream. He played his way onto the Washington Redskins in 1977 based largely on his special teams acumen, and a few seasons later was starting at safety for a young Joe Gibbs. In the Redskins Super Bowl XVII victory, Murphy had a key interception, and in 1983 he led the league in picks and was named to the Pro Bowl.

“Mark meant a lot to the Redskins organization,” Gibbs said when Murphy was hired by the Packers in 2007. “He was a great person along with being one of the brightest and most competitive people we’ve had here at the Redskins.”

Always fascinated by the business world, Murphy enrolled in AU’s Kogod School of Business during his second season in Washington. He went full time in the spring, took one summer class, and one at night in the fall while he worked his day job with the Redskins.

In 1989 he added a JD to his MBA, and later joined the U.S. Department of Justice as a trial attorney in the Civil Division’s Federal Programs Branch. But athletics was his first true love, so after stints as athletic director at Colgate then Northwestern, he joined the Packers.

With a glistening green steel and glass atrium housing restaurants, pro shops, and the Packers Hall of Fame attached to the football mecca that is Lambeau Field, the franchise is a 365-day, multimillion dollar business operation. It’s pigskin Shangri-La.