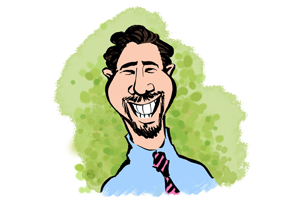 “There is something primal about a hand-drawn image that goes back to people painting on caves. We’ve always had cartoons, and editorial cartooning has a very rich history in the United States. It’s a powerful way to have a voice in the national conversation,” says Nate Beeler, SOC/BA ’02, an award-winning editorial cartoonist for the Columbus Dispatch.

By now, Beeler’s cartoons are certainly part of the national dialogue. His depiction of the Statue of Liberty and Lady Justice embracing following the Supreme Court’s decision to strike down the Defense of Marriage Act (DOMA) won the 2014 John Fischetti Editorial Cartoon Competition.

When the news of DOMA broke, Nate says he struggled for inspiration at first, but once he knew what he wanted to portray: the joy of same-sex couples as well as the scope and historical significance of the ruling, he says, “It seemed a natural fit to put Lady Justice and Lady Liberty together because this decision affirmed freedom and also righted an injustice.”

Nate draws five editorial cartoons each week for the Columbus Dispatch and his cartoons are also syndicated internationally to more than 800 other publications. “When you’re an editorial cartoonist, your work is basically a visual column, and you fall into the natural rhythm of the news,” he says.

Nate uses the newspaper and Twitter to track the national news conversation and search for topics that will resonate with his audience. Once he chooses a topic, he does extensive reading to determine how he feels about the topic, which guides his editorial approach.

His first foray into creating a cartoon tied to a national news story was for the edition of The Eagle published after September 11, 2001. Nate drew an image of the Twin Towers with angel wings, and the original drawing still hangs in The Eagle offices today. In fact, the The Eagle was Nate’s first stop when he arrived on campus, and he still stays in touch with his former Eagle colleagues and fellow alumni, including Brett Zongker, Scott Rosenberg, and Andrew Noyes.

American University’s strong journalism program and location in Washington, D.C. motivated Nate, a Columbus native, to attend AU. During his time in college, he was an editorial cartoonist for The Eagle and created two comic strips: Undergrad and Lawn Darts from God. His work with The Eagle earned him the prestigious Charles M. Schulz Award for best college cartoonist as well as the John Locher Award.

Since then, he has won more recognition, including the 2009 Thomas Nast Award from the Overseas Press Club and the 2008 Berryman Award from the National Press Foundation.