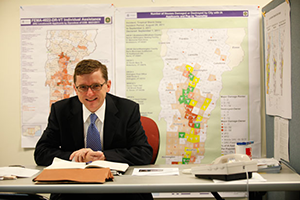 Neale Lunderville, SPA/BA ’96, has spent his career in public service and improving his home state of Vermont, which is one reason he will receive the 2012 Alumni Achievement Award.

Lunderville decided to attend American University partly because it was far from Vermont, where he grew up, but also because of “the value AU places on service,” he says. As a student, he was active in the Student Government, University Senate, the Student Advocacy Center, and Varsity Quiz Bowl.

After graduating and spending a few years living in D.C., Lunderville was drawn home when Vermont gubernatorial candidate Jim Douglas (R) asked him to run his campaign. Douglas won, and Lunderville began his career giving back to the state. He was senior staff in Governor Douglas’s administration for four years before becoming Secretary of Transportation and later Secretary of Administration.

Lunderville left government to work for Green Mountain Power, a private business, but when Tropical Storm Irene hit Vermont, he once again answered the call to serve when Governor Peter Shumlin (D) asked him to be the state recovery officer. The storm was one of the worst in Vermont’shistory and closed 500 miles of state roads and hundreds of bridges, impacting and displacing thousands of residents.

“In many ways, it was completely devastating,” Lunderville says.

As recovery officer, he coordinated all aspects of disaster relief on the local, state, and federal level. The storm hit in September, and all roads and bridges reopened before Christmas. Vermont was hailed as a model state for disaster recovery.

“In some places, this would take years, but it took Vermont less than four months. It’s a remarkable achievement for any state, but it shows the real character of our state,” Lunderville says.

Now, Lunderville is CEO of NGAdvantage, a new energy company that will deliver natural gas to Vermont businesses that do not have access to a pipeline. Former Vermont Governors Douglas and Shumlin were on hand for the recent groundbreaking of the company’s new filling station, where natural gas will be compressed and loaded onto trucks for delivery to businesses.

Natural gas is much less expensive than traditional electric power, and Lunderville believes NGAdvantage can save Vermont businesses millions of dollars, hopefully allowing them to expand and create jobs for Vermonters.

“I love Vermont; I love working to make this a better place, and I was very fortunate to work for the governor of Vermont and in positions where I could affect positive change. Even with our new business, one of the reasons we’re doing it in Vermont is we believe in this state, and we want it to be a better place. … Those are all ideas that were strongly reinforced at AU,” Lunderville says.

In fact, Lunderville has worked with many AU Eagles on campaigns and in state government. He says, “AU has played an important part in Vermont’s history in the past 10 years. A lot of people involved in politics in Vermont have a strong AU connection.”