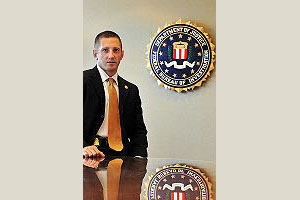 There is probably nothing that could have kept Rick Evanchec, SPA/BA ’02, from serving in the federal government.

Currently a special agent with the Federal Bureau of Investigation, Evanchec’s interest in government work first piqued in the summer following his junior year, when he secured an honor’s internship with the Department of Justice.

While he heavily credits the AU Career Center in helping him get the position, Evanchec’s infectious energy and earnest nature certainly didn’t hurt.

It was fall of his senior year that firmed Evanchec’s convictions that he could choose a career that truly affects our world. One of the many D.C. residents to experience the September 11 attacks, he soon realized that countering terrorism would become one of the major tests of his generation – and he wanted to be a part of it. Evanchec began his career after graduation as special assistant to the assistant director with the Bureau of Alcohol, Tobacco, and Firearms.

After four years of service with ATF, Evanchec began his career with the FBI as an intelligence analyst. In June 2008, he entered the FBI Academy. Following five months of intensive training, Evanchec was chosen to represent his class as graduation speaker, a reflection of his dedication and success during his time there. Among his duties was the honor of introducing then-President George W. Bush, an opportunity that afforded him a few private moments with the president throughout the day.

“It’s an interesting way to start your career,” he said, noting that his interactions with the commander-in-chief were his most memorable moments of the day.

True to form, Evanchec wasted no time in embracing and thriving on the varied tasks of an FBI agent. In 2006 he was assigned to a four-month tour in Iraq, working in the Regime Crimes Liaison Office to assist the Iraqi Higher Tribunal with the prosecution of Saddam Hussein and other regime criminals. Recently, Evanchec served as a member of the White House transition team, interviewing cabinet secretaries and administration staffers before granting security clearances.

Evanchec’s ability to lead is nothing new to those who know him from his AU days. Active in student government, resident life, and the Freshman Service Experience during his time on campus, he is most proud of the Eagle Endowment project that he helped to launch. The now-thriving program awards grants for student-led service projects in the D.C. area, most notably with the D.C. public schools.

While Evanchec could not choose a favorite from this year’s crop of awardees, he is impressed with the proposals and talented students behind them. “It’s great to see that the reasons I came to AU are the same reasons other people come to AU,” he said.

As a member of the AU’s Alumni Board since 2003, Evanchec puts the same dedication into his work to increase involvement as he does everything else he sets his mind to. “It’s an exciting time for alumni at AU,” said Evanchec, noting the upcoming expansion of the regional chapters program and the Alumni Board membership.

Although his Alumni Board term will end next year, Evanchec has committed himself to stay involved. Given his history, there’s no doubt he’ll continue to be a leader in – and beyond – the AU community.

Look for Evanchec at the Port and Politics Reception on Oct. 24 – and the rest of the Alumni Board over Alumni Weekend, Oct. 23-25.