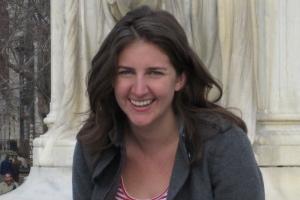 “I always knew I wanted to go to school in D.C.,” Smith Rodes, SOC/BA ’01, begins when recounting her path to AU. “My brother’s friend from high school went to AU, so I was familiar with the school when I started my search.” Rodes was one of “only seven or eight students in [her] freshman class who were from Kentucky.”

While a student, Rodes dove right into the local scene, co-hosting a WVAU radio show with fellow AU alumna Becca Youngerman, SPA/BA ’00, SPA/MPA’12, now the associate director of alumni relations in the Kogod School of Business. “We played a lot of Indigo Girls and Dave Matthews Band on Wednesday afternoons,” Rodes remembers. She also served as the program manager for the station beginning sophomore year, which included a great perk for a college student – free concert tickets as a station representative.

“I don’t know how I expected my career would end up when I came out of AU,” Rodes relates. After graduating with a degree in visual media, Rodes stayed in D.C. working in video production. “I thought I would be a documentary filmmaker, but I quickly realized that wouldn’t happen,” she remembers. So one year post graduation, she decided to try something completely different.

In accordance with AU’s theme of “Ideas into Action, Action into Service,” Rodes took action, joining the City Year program in Chicago. City Year brings together young adults of all backgrounds for a year of service working in public schools. While with City Year, she developed a strong interest in non-profit work. Rodes took this new-found interest and enthusiasm and spent the next few years in Chicago, developing large-scale fundraising events like a three-day Breast Cancer Walk with Event 360, an organization dedicated to improving funding and outreach for non-profit organizations. Her work experience at Event 360 and interests led her to enroll in New York University for graduate work in non-profit management.

After finishing her degree and working at a nonprofit for a couple of years in New York, Rodes noticed a lot of District travel in her personal calendar, catching up with friends from her AU days who had stayed local. “I realized D.C. was the better option for me,” and she made another big move. She now manages the budget and financing for grants for the National Association of Community Health Centers in Bethesda, Md.

Even with these cross-country moves, Rodes has kept up her AU network. She participated in Alumni Chapter events in both Chicago and New York, and now is a member of her 10-year reunion committee, which has already begun work on the Class of 2001 reunion scheduled during All-American Weekend 2011. Rodes “had a wide net of friends” while a student. From her study abroad classmates in Prague to her floor mates from freshman year, Rodes is looking forward to seeing her scattered AU friends. “It’s a way to reconnect with some people I haven’t seen in years,” she notes.