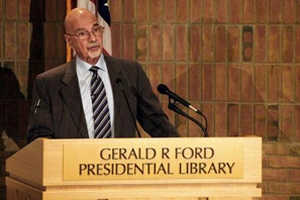 "I love American University. I wanted to stay and get my degree. No matter what I was doing, I always arranged it so I would have time to go to AU."

Even from the way Ronald H. Nessen, CAS/BA '59, speaks as we sit in an alcove of SOC's McKinley Building, it is evident that he loves his alma mater. Ron has had a distinguished career in broadcasting and journalism –going from a radio journalist in Arlington, Va. to television news correspondent in Vietnam, to Press Secretary for President Gerald Ford.

Ron put himself through American University by working part time and going to school in the evenings. He knew more than anything that he wanted to get a degree from AU. He graduated in 1959 with a bachelor's in history.

After a several years of news, writing, and reporting, Ron became a television news correspondent for NBC News. He served as the White House correspondent from 1962 to 1965, and then spent time as foreign news correspondent, including five tours covering the Vietnam War. "In war," he says, "you see terrible things that you will never forget."

After getting seriously wounded by a grenade in July 1966, Ron recuperated and chose to go back to Vietnam and finish his assignment. In 1974, White House Press Secretary Jerald terHorst resigned after President Gerald Ford gave Richard Nixon a presidential pardon. President Ford asked Ron to join the administration as Press Secretary. Ron served as White House Press Secretary until the end of the Ford Administration in 1977. He went on to be a writer, lecturer, and public affairs specialist in Washington. His book, It Sure Looks Different on the Inside, speaks of his time in the White House.

Reflecting on his career path, Ron says, "Nobody really knows where they are going to go in life. Things have unfolded in a way that I never expected." In one of many interesting twists in his career, Ron was Larry King's boss at Mutual Radio Broadcasting Network, where ran the news department for many years.

Throughout his career, Ron always had a special place in his heart for AU. He currently gives back as a volunteer for the SOC Mentoring Program, and he enjoys seeing his old stomping grounds. His favorite memory of his time in college, though, is uniquely AU: "When Willard [Scott, NBC News's "Today" weather-person], Eddie [Walker, radio personality and first blind student at American University] and I worked at WAMU. We all wanted to go into broadcasting, and we all ended up in broadcasting."