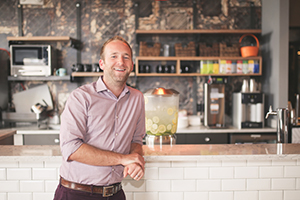 Forgetting something at the grocery, ten dollar spice jars he’d only used once, and wasted food were the inspiration for Ryan Hansan’s business, Scratch DC. The concept was born out of Ryan’s frustration with the cost and inconvenience of cooking his own meals. “I wanted to cook at home, but the costs of a single meal add up,” he says. “I wanted to make healthy meals, but I didn’t research five recipes and then go to the store every week. I was always forgetting something.”

Ryan, who graduated from Kogod in 2008, founded Scratch DC to help others eat better – and eat easier – at home. The delivery service brings packed and prepped two-serving meals right to customers’ doors. The package arrives at an appointed time and includes a step-by-step recipe and everything required to make a gourmet meal in about 30 minutes. According to Ryan, “all you really need is a couple of pots and pans.”

Local, organic, delicious, and green, Ryan says recipes come from all over. Some were inspired by Ryan’s mom’s cooking, some are tweaked from cookbook fare, and occasionally clients submit their own. “No one on staff has culinary training. We’re a band of misfits in the kitchen,” Ryan says. Despite that fact, Scratch DC now boasts nearly 1,500 Facebook fans and rave reviews on Yelp.

Ryan says he originally tested his idea with friends, beginning last summer. After the initial slicing and dicing and once he formalized Scratch DC, Ryan attended festivals in the D.C. area, talking to people about the concept and getting the word out via social media. Recently, Scratch DC expanded its delivery to Arlington and Alexandria, and Ryan hints that the company plans another expansion in the coming months.

A native of Reston, Virginia, Ryan says he is grateful for his time at AU. “I had a blast with great leaders, especially in Kogod. It inspired me, challenged me, and put me – indirectly – on this path,” he says. So far, that path includes a half dozen employees, a healthy serving of homemade sauces and salad dressings, and plenty of slicing and dicing.