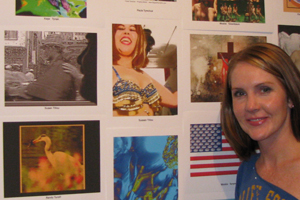 If pictures are worth 1,000 words, then Susan Tillou’s, SIS/MA ’95, life work says more about the state of the world than any annual report ever could.

During the six years Tillou served as an international aid officer for both the United States and the United Nations, the SIS alumna documented her travels with intricate, fine art photographs that recently appeared on display at Hollywood’s renowned ArcLight theatre.

“I was traveling to so many different countries for the work I was doing, I just wanted to capture what I was seeing,” Tillou said. “I didn’t have the intention to put them on the Web or apply for an exhibit.”

Yet, Tillou’s photography, a forte she never formally studied, is both a captivating glimpse of repressed peoples and an artistic autobiography. Her seven published albums chronicle 10 of the 30 countries she’s visited, including post-war Bosnia and East Timor. Though occasionally dark, each of her photos celebrates “basic humanity,” a theme, she said, that is as simple as it is undervalued.

“I called the Web site “World in Zoom” because headlines and people often lose track of day-to-day [life in third world nations],” she said. “When we think of other countries, we think of… politics, but not average people and how they live.”

A New Frame of Reference

Blessed with a unique lens through which to see the world, Tillou attributes her take on life to her experiences out of the classroom.

“To be really honest, I was ready to get out into the world,” Tillou said. “Sometimes, sitting in class, it’s really hard to conceptualize what you’d be doing day to day, and [my internship] helped me figure out what I wanted to do.”

While Tillou switched professions – from international aid work to international media analysis – in 2003, she’s still just as passionate about her true love – photography.

“I’m doing something totally different now; I wanted a 9 a.m. - 5 p.m.,” Tillou said of her new job. “My travels now take me to first world countries, but some of that is on the Web site too.”