On November 2, a panel of distinguished scholars participated in “Armistice and Revolution: Russia and the World in 1918,” a Carmel Institute of Russian Culture & History Symposium held at American University’s Constitution Hall on the East Campus Commons.

“The Institute was founded with the assumption that stereotypes need to be overcome, and that thinking in those terms is not constructive,” Carmel Institute Director and Associate Professor of history Anton Fedyashin remarked. “Dialogue is not a sign of weakness or appeasement; it is a sign of national self-confidence and an intelligent foreign policy for all sides involved, but it has to be informed by historical knowledge.” 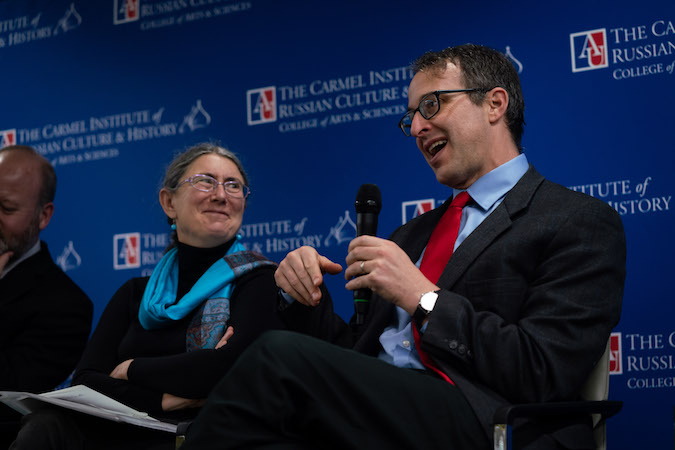 Prior to the scholars’ presentations, Anatoly I. Antonov—the Ambassador of the Russian Federation to the United States—made brief remarks.

“These weeks the whole world celebrates the one-hundredth anniversary of the end of World War I, which became a tragedy of a truly global scale,” Ambassador Antonov said. Among the Entente Forces, Russia suffered the highest casualties, the ambassador noted. This grim fact has led to several recent national remembrance initiatives in Russia, including monuments, exhibitions, and a website that provides public access to a unique archive of historical documents.

“The battles of the First World War ended one hundred years ago,” Ambassador Antonov stated. “Its lessons, however, are still relevant today. Humanity should accept the single great truth that violence only breeds violence. The road to peace and prosperity is only possible through dialogue and mutual consent. That is why it is so important to discuss and analyze that historical period,” he concluded.

The first symposium presenter was Eric Lohr—American University Professor of History, and the Susan E. Carmel Chair of Russian Culture and History—who spoke on the topic of “Armistice from Below.” The Great War enabled the revolution and civil war in Russia. Russia’s “armistice came, in a sense, a year earlier—in November 1917, when the Bolsheviks unilaterally stopped fighting. But the Russian armistice did not lead to peace. Germany took huge territories after the cease-fire, dictated a very punitive peace, and the country went immediately from total war to even more violent total civil war.”

Historian and author Borislav Chernev reminded the audience of Lenin’s argument that “World War I was an imperialist war, basically being fought for the re-distribution of the world—the Germans wanted to take over the colonies of the British; the British wanted to destroy the German fleet; so on and so forth.” After taking power, the Bolsheviks wanted none of this because their new revolutionary goal was to “transform the world war into a series of civil wars, which would then promote world revolution.” And when 750,000 workers went on strike in January 1918, in Wiener Neustadt, Austria, the specter of world revolution ceased to be entirely theoretical.

Lenin’s policies catalyzed some changes in the Western world that are surprisingly current. Elizabeth Wood, Professor of Russian and Soviet History at MIT, addressed war and revolution’s profound impact on gender roles in Russia, both in respect to relations between the sexes and in terms of policy changes. Critical to the momentum of the February 1917 revolutionary events in Petrograd, women from all classes took to the streets demanding a better life “and by March 1917, they got the vote. Russia gives women the vote before almost any other country.” To co-opt a force they recognized as strong, the Bolsheviks empowered women to hold political office and declared them equal members of the household and in marriages, with the right to participate in village assemblies. A whole host of new legal codes were enacted, authorizing civil marriage, divorce, legitimacy for illegitimate children, and the legalization of abortion. “They had a law on sexual harassment that, today, would still look revolutionary,” Dr. Wood remarked. “The quote from the Criminal Code of 1926 says, ‘Compulsion of a woman to enter into a sexual liaison by a person in relation to whom the woman is materially or professionally dependent is punishable by deprivation of freedom for up to five years.’ It’s ‘Me Too’ in 1917!” “We see that, in this moment of revolutionary upheaval, women gained many things that we sort of take for granted,” Dr. Wood declared. “It was a ground-breaking thing.”

David Engerman of Yale University emphasized 1918 as a turning point in the Bolsheviks’ effort “to expand the horizons of Russia beyond Russia’s borders—imagining a new world system,” but their dreams of global revolution soon took on a life of their own, sometimes with different effects than those of their originators. But as hopes for a European revolution faded, the Bolsheviks embraced “revolution in the east” as Leon Trotsky argued that “‘the road to Paris and London,’ ran through ‘the villages of Afghanistan; the Punjab; and Bengal’.” But the result was also the appropriation and adaptation of communism to local circumstances. “The dreams of global revolution were plural,” Dr. Engerman commented, “they circulated in the minds of revolutionaries all around the world in the decades after 1918.”

Professor of History at the European University at Saint Petersburg Alexei Miller explained the role of the two Soviet foundation myths—the October Revolution and the Second World War—in the politics of memory in contemporary Russia. The Russian memory of World War I was, Dr. Miller observed, dramatically different than that of France, Great Britain, or the United States. “It was, during Soviet times, practically erased from the memory to the extent that there was not a single cemetery in Moscow with any monuments to the people who fell fighting in World War I.” The conflict nonetheless has a crucial role in Russian memory politics, because it raises the question “of whether the revolution was caused by the defeat in the war—or the defeat of the war was caused by the revolution. And here, it is very clear, that the collapse of the state and state capacity begins in February 1917.” Dr. Miller observed that in 2017, three national monuments were dedicated by Russian President Vladimir Putin: to the victims of communist oppression; to Tsar Alexander III; and a memorial cross—torn down with the direct physical participation of Lenin—at the location where Grad Duke Sergei was assassinated in 1905.

Questions from the audience touched on memory politics, women’s rights, global revolution, American journalist John Reed, the financing of the revolution, and more. 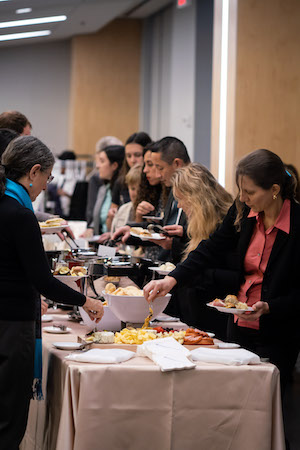 Drew Smith—a graduate student in Literature at AU—offered her appraisal of the symposium: “The entire event was an honorable memory to the end of The Great War and an important reminder that peace never comes by a single element,” she said. “Each presenter provided convincing evidence of the importance of their factor while acknowledging it was one of many. Having the Russian Ambassador there was an incredible privilege that contributed to the significance of remembering not only our own history but the history of our allies as well.”

Chernev, Boris. Twilight of Empire: The Brest-Litovsk Conference and the Remaking of East-Central Europe, 1917-1918 (University of Toronto Press, 2017)

Wood, Elizabeth. The Baba and the Comrade (Indiana University Press, 1997)

Engerman, David. Modernization from the Other Shore: American Intellectuals and the Romance of Russian Economic Development (Harvard University Press, 2003)