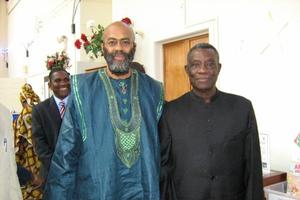 Although immigration literature typically focuses on people moving from developing countries to more prosperous ones, SPA Associate Professor Steven Taylor's new book explores the opposite phenomena. In Exiles, Entrepreneurs, and Educators (SUNY Press, January 2019), he examines waves of African-Americans leaving the United States for the West African country of Ghana.

Between 1957 and 1966, some black people in the United States, suffering under the repression of Jim Crow laws, migrated to Africa.

“The people were highly educated and very talented — academics and architects — who felt their skills would be appreciated,” said Taylor of their move to Ghana, a place where many could trace their heritage through the slave trade. “It was a time of optimism where African-Americans wanted to help develop the country.”

The first cohort came during the regime of President Kwame Nkrumah, but a coup replaced the leader, and the environment changed. African-Americans were no longer welcome, said Taylor. After a period of repeated coups and a regime change in 1981, a second surge of African-Americans arrived in search of commercial opportunities.

After making nine trips to Ghana since 1999, Taylor blended archival and ethnographic research to give insight into these migration trends. As part of his project, he interviewed academics, political elites, and governmental leaders, including the first president of Ghana.

"Ghana is one of Africa’s longest enduring democratic republics with free elections and an English-speaking population, making it easy to research," said Taylor.

Through his work, funded in part by a Fulbright Fellowship, Taylor discovered African-Americans did not fall into the same political patterns in Ghana as in the United States. Although most black people identify with the Democratic Party in the United States, they were not drawn to a similar type of party in Ghana.

“The parties in Ghana are centrist and similar on many issues,” said Taylor, with many people making decisions based on their tribes and region. “There are no such issues like civil rights” to separate the parties.

Indeed, the African party that was modeled after the U.S. Republican Party had pro-business positions and attracted many new black arrivals eager to establish themselves as entrepreneurs more.

In the book, Taylor dispels some of the incorrect assumptions about African politics and provides readers with an insightful look at how developing nations can embark upon a path toward democratization.