In her new book, "Anti-Semitism Revisited: How the Rabbis Made Sense of Hatred" , French Rabbi Delphine Horvilleur explores how the hatred of Jews is seen through the lens of the sacred texts, rabbinical tradition and Jewish lore. On March 1, 2021 she discussed both traditional and modern Jewish responses to antisemitism, including its latest manifestations in today's France. Hosted by American University's Center for Israel Studies (CIS) and moderated by CIS Director Michael Brenner.

In addition to the video above of our March 1 event with French Rabbi Delphine Horvilleur, please see the complete series video playlist on Youtube: Antisemitism Since the Holocaust. 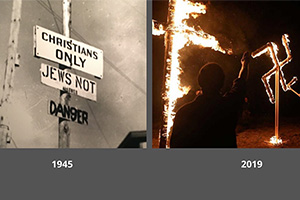 German Ambassador to the United States, Dr. Emily Haber, and CIS director Professor Michael Brenner discussed Germany's responsibility in facing the past and fighting antisemitism today. The fight against antisemitism plays a particularly important role in Germany compared to other countries. Everyone living in Germany bears responsibility for ensuring that the crimes of National Socialism must never be forgotten.

In her new book, Anti-Semitism Revisited: How the Rabbis Made Sense of Hatred French Rabbi Delphine Horvilleur explores how the hatred of Jews is seen through the lens of the sacred texts, rabbinical tradition and Jewish lore. She discussed both traditional and modern Jewish responses to antisemitism, including its latest manifestations in today's France. Moderated by CIS Director Michael Brenner.

University of Chicago Professor of History David Nirenberg, author of the much-acclaimed Anti-Judaism: The Western Tradition joined Paola Tartakoff, chair of Rutgers University’s Jewish Studies Department, and author of Conversion, Circumcision, and Ritual Murder in Medieval Europe, to discuss the continuities and ruptures between medieval anti-Judaism and modern antisemitism. They confronted the provocative question: Is antisemitism not just part of our historical tradition but also of contemporary Western culture after the Holocaust? Moderator Lisa Leff is an AU professor of history and director of the Mandel Center for Advanced Holocaust Studies at the United States Holocaust Memorial Museum.

Americans have long made claims of exceptionalism, contending that this country, purportedly built on foundations of equality, freedom, and democracy, was and remains a powerful departure from other lands. At one time, American Jewish historians argued that this exceptionalism included a very limited history of antisemitism on American soil, which was quite different from the experience of antisemitism elsewhere. In this conversation, Annie Polland, executive director of the American Jewish Historical Society and co-author of Emerging Metropolis: New York Jews in the Age of Immigration, 1840-1920, and University of Wisconsin Professor Tony Michels, author of A Fire in Their Hearts: Yiddish Socialists in New York, asked: Was antisemitism in America ever the exception? Professor Pamela Nadell, director of the Jewish Studies Program, will moderate.

After World War II, surveys of the American public revealed more favorable attitudes towards Jews and significant declines in antisemitism. Nevertheless, antisemitism did not disappear. When Jews faced it, they employed personal and private strategies to counter invective. Others banded together in organizations to defend their people, and founded alternative institutions to counter those that excluded them. In this conversation, Michigan State University Professor Kirsten Fermaglich, author of A Rosenberg by Any Other Name: Jewish Name Changing in America, and University of Minnesota Professor Emerita Riv-Ellen Prell, author of Fighting to Become Americans: Jews, Gender, and the Anxiety of Assimilation, explored the strategies American Jews invented to respond to antisemitism and it consequences. American University Scholar-in-Residence Lauren Strauss (Jewish Studies) will moderate.

Over the past 75 years, since World War II, the Arab world has been transformed by a massive demographic un-mixing, as their Jewish communities largely left for Israel or elsewhere. What place do the few remaining Jews have in Arab societies? What memories do Arabs have of the Jews who used to live among them? What legacy remains of centuries of coexistence among Muslims, Christians, and Jews? How have the cataclysmic events of the mid-20th century, namely the Holocaust and the establishment of Israel, transformed historical attitudes?

These are some of the questions which three experts in the field will discuss: Aomar Boum is a socio-cultural anthropologist at UCLA, whose work has focused on the anthropology and history of Jewish-Muslim relations from the 19th century to the present. His books include Memories of Absence: How Muslims Remember Jews in Morocco. Robert Satloff, Executive Director of the Washington Institute for Near East Policy, has written extensively on Jewish-Muslim and Arab-Israeli relations. His books include Among the Righteous: Lost Stories from the Holocaust's Long Reach into Arab Lands. Mehnaz Afridi, author of Shoah through Muslim Eyes, is Director of the Holocaust, Genocide & Interfaith Education Center at Manhattan College, where she teaches Contemporary Islam and the Holocaust. The moderator was Elizabeth Thompson, Mohamed S. Farsi Chair in Islamic Peace at American University.

Where does criticism of Israel end and antisemitism begin? Two scholars of high reputation in Jewish history and the history of antisemitism brought their expertise to this topic which has been loaded with polemics in recent years. Dina Porat is professor emerita of modern Jewish history at Tel Aviv University and the chief historian of Yad Vashem. The author of many books on the Holocaust and the Zionist leadership, she was crucial in formulating an extended definition of antisemitism accepted by many governments today. David Myers is professor of Jewish History at UCLA, where he directs the Luskin Center for History and Policy. He also serves as the president of the New Israel Fund. His latest book is The Stakes of History: On the Use and Abuse of Jewish History for Life. The discussion will be moderated by AU history professor and director of the Center for Israel Studies, Michael Brenner.