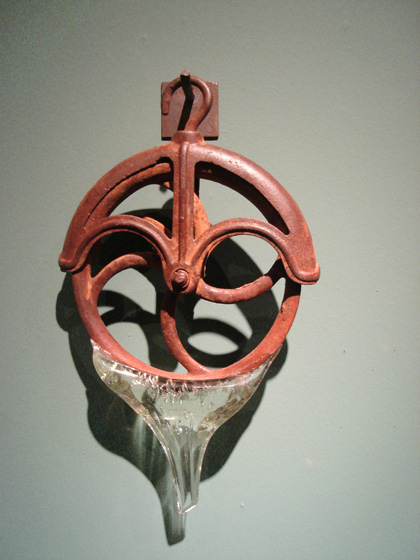 Influential sculptor Mary Shaffer creates a site-specific glass and metal "tool-wall" installation for her solo-exhibition to feature her fascination with discarded tools. "I take lovingly crafted, hand-forged tools - the epitome of American inventiveness - to preserve and pay tribute to activities and methods of working that have disappeared from our modern lives," she says.

In addition, select glass work from the past five decades of Shaffer's active career will be shown, including her Light-Catcher series, which explores the way light and shadow create three dimensional form.

Mary Shaffer was an important influence in the early glass movement. Shaffer "brought art to glass and glass to art" as art critic John Perrault writes. Doug Heller, a New York art dealer, says that the glass world was never the same after Shaffer burst upon the scene in the early 1970s. Shaffer invented a whole new way to work with and think about glass-a process she named "mid-air slumping."

Shaffer has shown her work in 60 museums worldwide. The artist has been a professor at New York University and Wellesley College, and her work is in the collection of the Metropolitan Museum of and as well as the Museum of Modern Art in Kyoto, Japan, among many others.