On February 27, the African American & African Diaspora Studies program and the Critical Race Gender & Culture Studies Collaborative (CRGC) co-hosted an event with the AU Student Government Women’s Initiative where musical guest BOOMscat performed their music to American University, followed by a panel discussion. BOOMscat is a DC-based duo composed of Asha Santee (BOOM) multi-instrumentalist/producer, and vocalist/songwriter Jennifer Patience Rowe (scat). Their sound is a mixture of Jazz, R&B, and Soul that come together to create a sound that ignites vulnerability, elevation and self-reflection. In doing so they conjoin sensuality and spirituality, two elements that are often juxtaposed.

Santee and Rowe met about seven years ago at an event where Santee played the drums and Rowe recited poetry, and since then they have had a connection. Both have musical influences from artists such as Erykah Badu, Jill Scott, Yebba Smith, Tank, Trey Songz, Marvin Gaye, and Earth, Wind, and Fire. Asha mentioned that fellow DC musicians influence their music too. The duo channels their own personal experiences and feelings to create their music. Santee says that she expresses her feelings through the music and Rowe is great at setting the tone of those feelings with words. BOOMscat’s lyrics explore themes of confidence, arousal, emotion, as well as manifestation and other spiritual practices in the same space. Although sensuality may make some people uncomfortable it is uncensored and true to the artists feelings and experiences which BOOMscat is all about.

BOOMscat acknowledges the importance of spirituality in one’s overall well-being, and the African American experience. Santee and Rowe both want to create a space where people can feel good about themselves, and in order for that to happen they tell us they need to feel good about themselves too. When asked about spiritual influences Rowe voiced her belief that “worship is gratitude and should not be limited to traditional spaces” explaining that she has had spiritual moments in places like the club or similar. They encourage listeners to be all of themselves at all times rather than parts of themselves in a specific setting. Santee added that their music does not have structure and instead contains outros in order to allow people to marinate in the feelings from a song. BOOMscat’s music makes the listener feel things and when asked about their biggest challenge Santee said that singing in BOOMscat was a huge challenge, but Patience encouraged Santee to sing and now Santee is growing more comfortable. Rowe said owning her own performance is her biggest challenge, but Santee has helped encourage Rowe to get more comfortable performing alone and owning it.

The duo also explained what BOOMscat means for queer women of color. Both singers identify as female and use she/her/hers pronouns when discussing the objects of their affection. They make listeners well aware of the fact that their music explores female homosexual relationships. They also use traditional black music forms to discuss homosexuality, and create a musical space for queer people of color to enjoy black music and address their sexuality to bridge the gap between queerness and blackness. Santee and Rowe also acknowledge the importance of the Black church to African Americans in general including themselves. What differentiates them is that they discuss the Black church without demonizing the queer identity. In their music they make the choice not to specifically describe church or any specific deity which leaves room for spirituality and sexuality to intersect for individuals of any religious denomination. This allows queer people of color to inhabit a spiritual place without condemnation.

The musical duo BOOMscat mixes Jazz, R&B, and Soul music to convey their emotions and create a space for people to be themselves. Through their belief that spiritual experiences cannot be limited to traditional spaces they have created music for people to explore their feelings and more importantly, a space for queer people of color to own a musically spiritual place without being condemned. This duo who encourages people to be themselves, to feel sensual and to not be afraid of their own feelings has a bright future ahead of them. 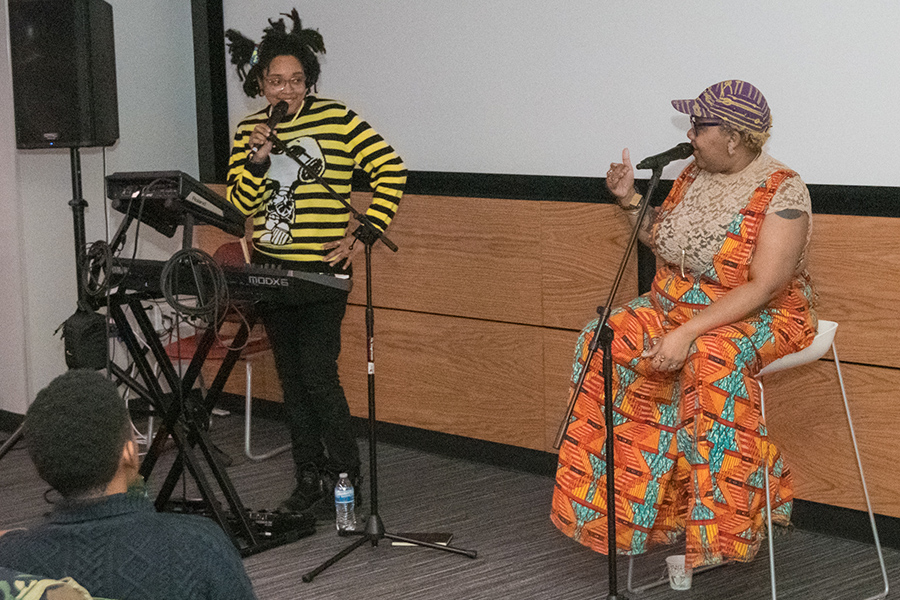