For Becca Peixotto, it all started out with a Facebook ad seeking “tiny and small specialized cavers and spelunkers with excellent archaeological, palaeontological, and excavation skills.”

Peixotto, a College of Arts and Sciences anthropology PhD student and graduate of the public anthropology master’s program, answered the ad—and became part of the team that made one of the biggest archaeological discoveries in recent years: a new species of human relative named Homo naledi.

The excavation was heralded across the world and is expected to change the way scientists think about human origins. “It was a momentous discovery,” said Peter Starr, dean of the College of Arts and Sciences. “And we at AU are very fortunate and proud to have one of our own play such a central role in this enormous effort.”

Two years ago, Peixotto and five other female scientists squeezed into a narrow chute leading to the Rising Star Cave in Maropeng, South Africa. Over three weeks, they worked 30 meters under the ground to excavate more than 1,550 fossil specimens, making it the single largest-ever fossil hominid find in Africa.

The specimens represented at least 15 distinct individuals, both male and female, and ranged in age from infants to older adults. They were identified as belonging to a previously unknown early human relative that was named Homo naledi by the expedition’s lead investigator Lee Berger.

For Peixotto, the expedition began with the Facebook ad, placed by Berger, looking for skilled archaeologists. Successful candidates also had to be small enough to fit through the narrow chute that led to the chamber. “It was the fastest cover letter I’ve ever written,” said Peixotto, who jumped at the chance to be part of the expedition.

“Studying at American University, I received really excellent training in field methods from the Dismal Swamp Field School with Professors [Daniel] Sayers and [Richard] Dent, and many other archaeologists along the East coast, so I felt that I had a good background to be working in this kind of environment,” she says. 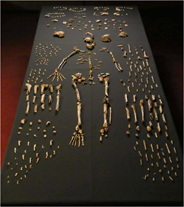 Peixotto explains that excavating in the chamber requires a unique skill set. “It’s not just that you have to be a caver, it’s not just that you need to be an archeologist or paleoanthropologist,” she says. “It’s also that you have to be able to deal with the environments, deal with the eyes of senior scientists watching your every move with video cameras, and also deal with things when they go wrong, because a lot can go wrong when you bring technology into an environment that it’s not built for.”

Physically, the excavation was not without danger or difficulty. “It was between a 25-and 45-minute commute from the surface down into the final chamber, traversing the cave system to get there,” Peixotto says. She and her team needed to slide down and sideways, climb on their stomachs, scale a jagged wall, step over gaps, and deal with the lack of light and the potential of falling.

At the same time, Peixotto describes the incredible beauty of the Rising Star Cave, which was named for the calcite formations on the ceilings of its chambers. “They are starburst-like formations, really delicate and beautiful,” says Peixotto, “and when you sit in that cave and shine your headlight up, it looks like you are looking at stars. It is really amazing.”

The Rising Star Expedition, says Peixotto, was unusual in the traditionally closed, guarded field of paleoanthropology—it was officially an open access paleoanthropological expedition. This means that expedition members blogged, tweeted, and video chatted to share their work with schools, teachers, and the public all over the world. At the same time, all their research and articles are downloadable and available to everyone.

The multidisciplinary team included senior scientists, early career researchers, students, and volunteers, highlighting the collaborative nature of anthropological research. In a field where discoveries are closely guarded, the open access ethos of Rising Star represents a radical shift toward a more inclusive space.

“Shifting this paradigm, and changing the traditional power structure, and changing who has access to this information is really important and quite exciting,” says Peixotto, who explained that each time she visits a school to talk about the expedition, teachers are able to download articles and 3D fossils for their students. In the past, she explained, this never would have been possible.

Peixotto said that open access is also a more efficient way of conducting scientific research. A multidisciplinary team of researchers was able to analyze the fossils in six weeks, a process that can take years in a closed environment.

At the same time, Peixotto said, it was rewarding to see young scientists working together with the elders in the field, getting excited over each discovery, and being willing to share their findings with each other. She described the moment when a scientist picked up a mandible and a maxilla in the lab and realized that they fit together. “We can show the world that science can be fun,” she said.