In just a short span from its establishment in 2017, American University’s Integrated Space Science and Technology Institute (ISSTI) has made many important contributions to space research. Some examples include direct contributions to NASA missions such as the Dragonfly (a mission to Saturn’s largest moon, Titan) and LUCY (the first mission to the Trojan Asteroids), as well as publishing new findings based on the data collected from missions and observatories such as the European Space Agency and Roscomos Space Corporation’s ExoMars Trace orbiter, NASA’s Hubble Space Telescope, and the International Ultraviolet Explorer.

“We thought this was a good idea and that there were opportunities, but I would say we were surprised at how quickly it has grown and how many different kinds of really exciting and impactful research different people are doing,” says Dr. Philip Johnson, director of ISSTI. “I am surprised about the range of research topics, from astrophysics to planetary science to earth science.”

ISSTI has many interdisciplinary courses in its curriculum like astrochemistry and astrobiology. In addition, Dr. Johnson wishes to add a space data science course and a space policy course to the curriculum.

The institute provides opportunities for all the affiliates, including students, to carry out research in specialized areas and interdisciplinary fields that contribute towards progress in space science and technology. ISSTI partners with some leading research facilities, such as the NASA Goddard Space Flight Center, the NASA Goddard Center for Astrobiology, and the Johns Hopkins University Applied Physics Lab. Many ISSTI members are also a part of these laboratories.

ISSTI also partners with the NASA District of Columbia Space Grant Consortium (DCSGC), which is headquartered at American University. Dr. Nathan Harshman, professor of physics and director of DCSGC, says the work of ISSTI and the science work at AU are synergistic. “ISSTI’s main focus is research; our main focus is broadening participation in the NASA mission and giving students authentic experiences. These two things go well together,” he explains.

Members of ISSTIwork on an array of projects. In the last year, three of ISSTI’s members were recognized for their contributions to the respective research centers, missions, and projects. Dr. Sara Faggi (research assistant professor at AU) is a postdoctoral researcher in the Solar System Exploration Division at the GSFC and a part of the GCA. She conducts studies that focus on understanding the composition of comets. Last year, Dr. Faggi was awarded the NASA Peer award for her contributions to the Solar System Exploration Division at the GSFC. Another ISSTI member, Dr. Giuliano Liuzzi (research assistant professor at AU) worked along with a team of scientists on the data collected by ESA-Roscomos ExoMars Trace Orbiter. This year, they were recognized by the ESA for their two new findings that were published in the journal Science Advances. One finding points at the new chemistry on Mars (detection of hydrogen chloride gas), while the other provides information about Mars’ water loss and climate evolution (ratio of two different forms of hydrogen present in Martian atmosphere). Dr. Liuzzi is also a part of the GSFC and one of the lead scientists of the Mars water loss and climate evolution investigation. 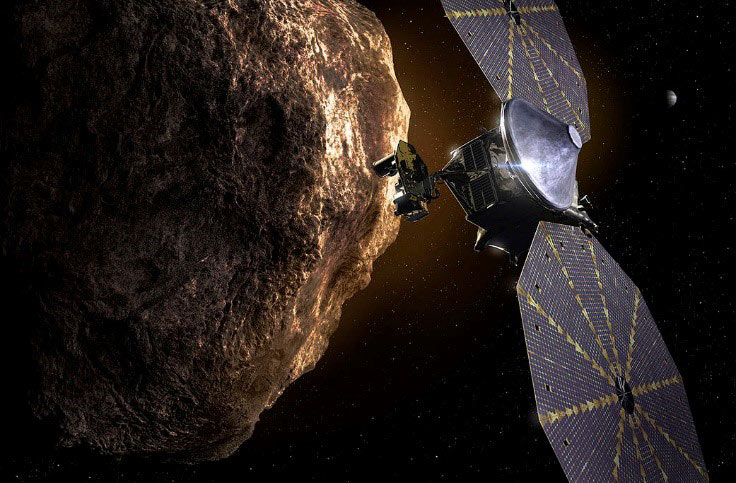 Illustration: The Lucy spacecraft passing one of the Trojan asteroids near Jupiter (Credit: Southwest Research Institute).

ISSTI member Dr. Allen Lunsford (research assistant professor at AU), who is also a part of GSFC, worked on the NASA LUCY mission. Specifically, the L’Ralph instrument (has a color visible imager and infrared imaging spectrophotometer), which is an important part of the Lucy spacecraft that will be launched later this year in October. A few weeks ago, Dr. Lunsford was awarded the NASA STARR award. He was nominated by his colleagues at GSFC to recognize his efforts and contributions towards this mission, for setting up the testing of the L’Ralph instrument at the Lockheed Martin site in Colorado and installing it onto the Lucy spacecraft.

AU students are also working on topics in space research through ISSTI. Kevin Leach, a senior year undergraduate student (double major physics and justice & law) worked under Dr. Frederick Bruhweiler (physicist-in-residence and AU research professor) in a study aimed at understanding the formation of highly ionized atoms (which require high energetic processes to be produced) in the Interstellar Medium (ISM, the matter present in between stars which contain both neutral and ionized gases and dust). Kevin was awarded a DC NASA grant and DCSGC Student Achievement Award for his work. 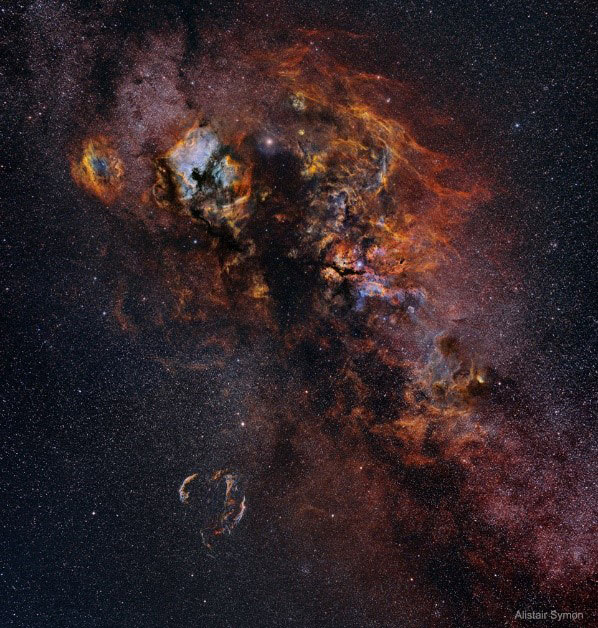 Kevin’s work mainly focused on Hubble Space Telescope (HST) data of two binary stellar systems, Cygnus X-1 and HD 190918. Both are in the constellation Cygnus (also known as “Northern Cross”) which can be observed in the sky on a summer evening. The amounts of X-rays produced by Cygnus X-1 are much higher than those produced by HD190918. The major finding of his work was detecting the large amount of highly ionized N+4 toward Cygnus X-1. The HST data (narrow widths of ultraviolet spectral lines for N+4) show that N+4 is formed in cooler ionized gas by ionizing X-rays (at temperatures less than ten thousand Kelvin and not in regions with temperatures near one million Kelvin). These findings are important as the amount of N+4 absorption seen towards Cygnus X-1 is the largest ever seen in ISM by the HST until now. Kevin Leach has just graduated and will begin law school this fall.

ISSTI has shown exceptional and exponential growth, and it seems that it will continue to do so. “It is really exciting. It has grown and done more than we even anticipated,” says Dr. Johnson. “The variety, the amount of research, the success and funding, all of that has exceeded my expectations from 2017.”