As human populations have grown, so has our use of plastic. More than 40 percent of the plastics used today are single-use. Large volumes end up as litter or in unintended places, such as our waterways. Plastic litter breaks up into smaller pieces in the environment through photodegradation and other physical and chemical processes.

The term “microplastic” was first used in the 1970s and refers to any plastic smaller than five millimeters in size. We already know that microplastics can be found in almost every environment on Earth, including the middle of the ocean, the tops of mountains, and in our food and drinking water. Most plastics are petroleum-based polymers. Exposure to plastic and its additives, such as phthalates and bisphenol A (BPA), can lead to adverse health effects such as increased incidence of obesity, cardiovascular disease, and endocrine disruption. Plastics can also be vehicles for pathogens and other chemicals like pesticides and polychlorinated biphenyls (PCBs). We know the most about microplastics in marine environments, but there has been little work on microplastics in freshwater systems, which has led to my current research on this topic.

My objective has been to investigate the prevalence and effects of microplastics in tributaries to the Chesapeake Bay. For the past few years, I have been working on microplastics in DC waterways with a colleague, Matt Robinson, from the DC Department of Energy and the Environment (DOEE) in the Watershed Protection Division. Preliminary research found microplastics in the gastrointestinal tracts of fish from both the Anacostia and Potomac Rivers. Recently, we have focused on one tributary to the Anacostia River, Nash Run.

This urbanized stream flows through the Deanwood and Kenilworth neighborhoods in Southeast DC. The tributary receives runoff and stormwater discharge, which requires an MS4 permit, from a largely impervious watershed in DC. The site has received attention from the DOEE, resulting in two trash traps being installed along its length (in 2009 and 2016), as well as one of the largest stream restoration projects in DC in 2016. All of this work has helped to improve the overall health of the waterway, but trash builds up in the traps and a fair amount still makes its way downstream to the Kenilworth Aquatic Gardens. It is likely that these beautiful freshwater tidal wetlands are accumulating microplastics.

People often ask how the plastic ends up in the water or the sediment. Most plastic originates on land; any trash or debris on the streets runs off into the storm drain and is carried into the local waterway. Nash Run can receive large volumes of water in a short period of time during heavy rainfalls. The rain carries trash and plastic litter from DC’s Ward 7 and Prince George’s County in Maryland through waterways and into Nash Run.

Barbara Balestra, in AU’s Department of Environmental Science, joined our efforts this year. Our work has focused on looking for microplastics in the segments of the stream above and below the trash traps. We have found microplastics in both sediment and water samples along this stretch. ENVS students in the laboratory sections of the Introduction to Environmental Science II course have separated, sorted, and categorized microplastics from water and sediment samples, validating our findings.

Adam Frederick, at Maryland Sea Grant from the University of Maryland, provided help to our research team on a microplastic project in the Patapsco River in Baltimore Harbor. This work has involved microplastics and biofilms, which are matrices of living organisms that grow on surfaces in the water. “The biofilm organisms and the resulting communities are important since they can be used as indicators of water quality, and their patterns of development can be used to indicate the stress on biodiversity in the environment,” Frederick said.

Our work investigates how microplastics play a role in biofilm formation and how they can affect the assemblage and biodiversity of the organisms that live there. “Microplastics can have an impact on the biodiversity of the organisms, since they can interfere with the physical nature of the habitat itself and are ingested by a number of invertebrates in the community,” he said.

We know that there are adverse environmental and health effects associated with exposure to plastics, and we have observed microplastics in more places than we would expect, including many locations within the Chesapeake Bay watershed. We need to know what is in the water, sediment, and organisms so we can better understand the environmental and health effects of plastic pollution. We need to identify the main sources and pathways of microplastics to the waterways because prevention is the most effective approach to deal with this problem. 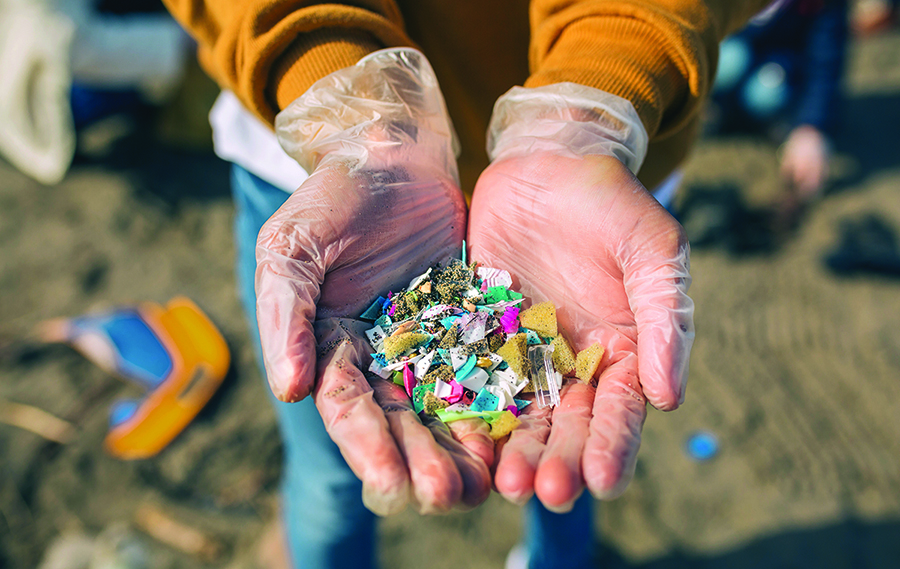