The Katzen Arts Center at American University hosts a variety of interdisciplinary collaborations of visual and performance arts. The exhibits on display are combinations of solo and group works. In February 2020, the Katzen Arts Center had an opening for Phenomena of Identity, a group effort exhibition including collective works of a variety of arts, including photography. The exhibit aims to shed light on the “fixed” societal concepts of identity and explore the origins of identity. The idea behind the phenomena of identity is about collective aspects, of any single person, that coexist within that person that ultimately create their identity.

The Phenomena of Identity exhibit focuses on how people determine identity through ancestry, physical traits, sexuality, and philosophy. Two focuses of the exhibit include the study of genetic markers in DNA and racial categorization as main facets of how society determines identity. The exhibit alludes to the idea that, because populations of people have not been completely isolated, it is likely that no “groups” of humans are purely descended from one line of ancestors. With this idea in mind, and the increasingly relevant and publicly available genetic testing such as 23 and Me, people are able to trace their DNA to multiple ethnicities all over the world, which makes identifying as any single ethnicity complicated. Using this information and paying special attention to specific locations on human DNA, genetic testing can result in better knowledge of a person’s ancestral origin. This type of specific site DNA testing focuses on population origin rather than race.

Aside from DNA determining ancestral origin, the exhibit also provokes the thought of societally fixed racial categories, which include specific physical traits, as being a part of a person’s absolute identity. Race is a social construct that originated when society set a “standard” hundreds of years ago. “A great black artist” or “a great [insert race here] artist” is defined as such, instead of being referred to as “a great artist” because of that set standard. This proposes the idea that Black, Latino, Middle Eastern or Asian races are not the standard. Figure 1.1 depicts the history of the US Census, as it pertains to racial categorization and presents an obvious set standard. It is representative of the idea that the races on the census are the only races to choose from (depending on the period of time). Information provided in figure 1.1 explains that, beginning only in 1960, people were allowed to determine their own race (out of the fixed set of races) and allowed to select more than one racial category that would identity them in the eyes of US government. This figure lends powerful proof to the idea that race is “fixed” and is a construct created by the people in seats of societal or political power. 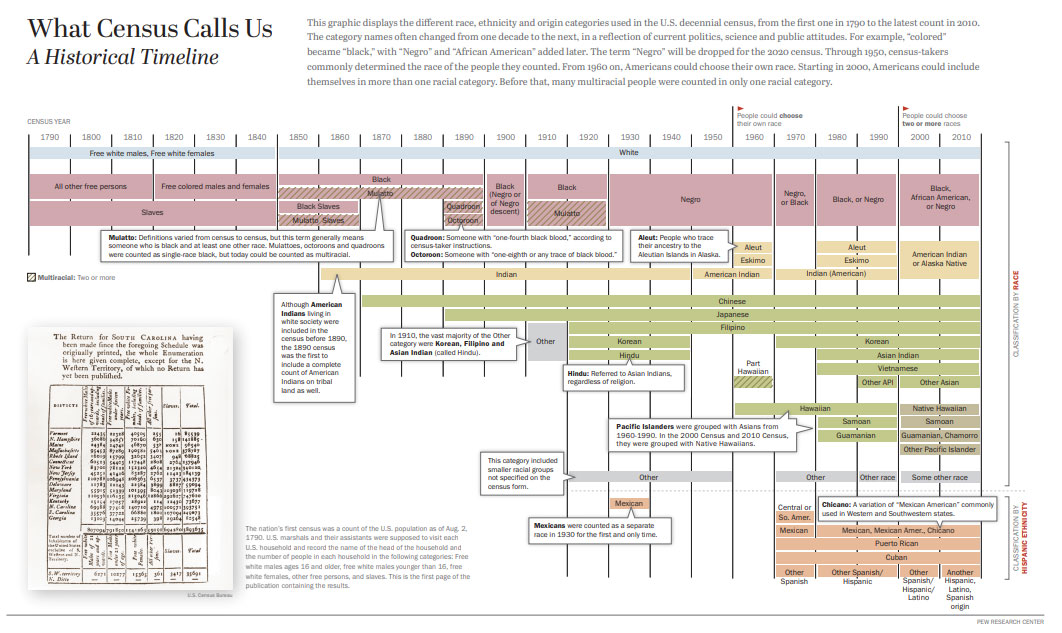 One of the artists who collaborated in the creation of the exhibit is Nieko McDaniel. McDaniel is currently an American University graduate student, and he is expected to graduate with his master’s degree in fine arts AU in May 2021. On his personal website, McDaniel describes his art as “artwork about world-building.” He goes on to explain that most of his art is centered around ideas of love, race, and innocence, and is a form of “social commentary” for him. This type of social commentary is especially relevant today, when a person’s identity is under constant scrutiny, may be used against them, and is sometimes decided for them, instead of by them.

The AU community is an extremely diverse community of people from all over the globe. One active member of the community is Joo Hyun Lee, a student, philosophy major, and administrative coordinator at AU. In addition to her philosophical insight, she holds a background in museum education and was able to provide great perspective in an interview. Her position that “art can be an agent of change, a catalyst of change and diversity inclusion” is a clear idea of what the exhibit represents. She also explained that using racial categorization to determine identity “created a structure of power,” and that leads to “using identity to structure society in a very destructive way.” This insight from a community member, not involved in the creation of the exhibit, attests to the very purpose of the exhibit: identity is not any singular category and definitely does not have a “standard.”

Madeline Cloud, another AU community member and AU alumni, has a vast STEM, humanities, and history background and was able to provide her professional insight. She described DNA testing for ancestral related history as just “another piece of the puzzle that is human identity.” Cloud was able to explain that “we can trace genetic trends to different populations of people.” However, connecting those populations of people to racial categories has no basis in science. Racial categories are constructs of the nineteenth century in regards to economic status.

Identity and how people choose to identify changes by the moment. Defining identity is not as simple as tracing your roots or looking in the mirror, but it is everything. Your identity is everything that science says is true, but it is also your religion, your likes and dislikes, your online persona, and most importantly, your perception of you is your identity.