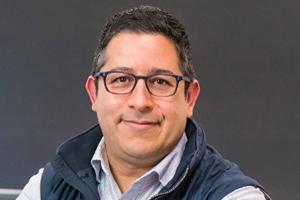 Ernesto Castañeda shows how the immigration debate goes way beyond Donald Trump, striking at the heart of American politics and identity.

Donald Trump’s anti-immigration rhetoric propelled him to the White House. Clashes with Congress over his proposed border wall led to the longest government shutdown in US history. If these developments seemed improbable just a decade ago, American University professor Ernesto Castañeda says they didn’t come out of nowhere. According to his new book, Building Walls: Excluding Latin People in the United States, the debate over immigration goes well beyond Trump—striking at the heart of American politics and identity.

“This has a long history. The fence is already there. We already have thousands of miles of fencing or walls—depending on who describes them—in San Diego, Arizona, El Paso, and many other parts of Texas. Border security was kind of consensus policy after 9/11, and supported by both political parties,” says Castañeda in an interview. “That is what this book is trying to do. Get beyond the moment and beyond the headlines.”

Castañeda teaches in the sociology department of AU’s College of Arts and Sciences.

Looking at that history with a longer lens, Castañeda restores to the record important context: people of Mexican and Spanish origin have been in the US for some 170 years. So those breathless reports, with eye-popping census stats, about a changing America are misleading and myopic. “After the Mexican-American War [of 1846-1848], you had tens of thousands of Spanish-speaking people in the Southwest. Parts of California, New Mexico, and Arizona were minority-majority places,” he says. “The idea that we have a white American creed in the South that was the norm, and now this new immigrant influx from Latin America and Mexico are changing the racial and cultural mix, is wrong. It is not thinking historically about their continued presence.”

In addition, stories about increased Latin immigration in the Northeast and Rust Belt often forget that there was a Mexican workforce in these areas in the 1920s and 1930s, he says. Contemplating these issues more deeply, Castañeda says, will point the way toward concrete solutions.

“If you think what Trump is doing vis-à-vis immigrant is wrong, immoral, not politically feasible, or against American values, then this applies many years back. It is not to blame or to point fingers, but to say, ‘We can be very clear about what we want to do in the future, and what policies we want to welcome immigrants regardless of their religion, race, and cultural differences,’” he argues.

Looking ahead, he also questions some of the assumptions made by economists and demographers about the US becoming a Hispanic-majority nation. Just as past racial and ethnic boundaries were fluid, racial and ethnic definitions in the future could be different, too.

“These are race projections as if nothing changes, and it assumes Latinos will always be Latinos. A fifth-generation person in Texas might have the last name ‘Hernandez,’ but they consider themselves a white Texan. We see how this changed with other ethnic groups, like the Italian and Irish.”

Reports about that demographic shift, even if exaggerated, feed anxiety—or worse, xenophobia and racism—in white communities. He says some of this anti-immigrant sentiment is quite common in mainstream media. Castañeda and other researchers found alarming reader responses in publications such as the New York Times and USA Today. “There were open calls to violence—that we should have machine guns at the border. Basically calling for the killing of innocents, as if this was North Korea or the Berlin Wall and an army killing an enemy.”

This “white backlash” gets to the exclusion that many Latin individuals feel and Castañeda explores in his book.

He interviewed college students who cross the border from Juárez to El Paso every day, and they experience first-hand the challenges of being a migrant. Other Latin people live in border towns and rarely go to Mexico. They consider themselves thoroughly Americanized, and immigration barely registers as an issue for them. Some migrants don’t want to live near the border at all, opting to move inland with their families to places like North Carolina or Washington, DC.

In some instances, Latin people start to internalize exclusionary rhetoric. “They reject their own background, or they are ashamed. They don’t want to teach Spanish to their children. They change their last names, or the spelling of the first names, to become very assimilated into the American mainstream. And some of them become anti-immigrant, even though their parents or grandparents were immigrants,” he explains.

Symbolizing So Much More

Since they have such a lengthy history in the US, Castañeda centers the book around Mexican Americans. He uses the all-encompassing term “Latin people,” because he says the label “Latinx” is still seldom used outside college campuses or activist circles.

Yet, as a sociologist, Castañeda hopes to convey the complexity of these issues. In the national climate that gave rise to Trump, most Americans still hold a favorable view of immigration. And when immigration and Latin exclusion enter the political arena, they become symbols for many other policies, from globalization to outsourcing to taxation.

“Exclusion is caused by multiple things. It is not only racism. It is not only inequality. It is not only cultural differences. It’s all of the above and other things,” he says. “And even building a wall would not solve the problems that America has.”