If you need any evidence of the impact of student research on life at American University’s campus, look no further than something that’s missing:

Following a 2009 study at AU’s main dining hall showed a significant reduction in food waste and dishes used when trays were removed, trays have mostly gone the way of beanies and sock hops.

“Our concern was that all of these other institutions were jumping on the bandwagon in the absence of data,” Kim said of the trend of universities tossing out trays. A Washington Post article, for example, reported that other area institutions that have gone trayless include Georgetown, Johns Hopkins, James Madison, and the University of Virginia.

A recent Kansas State University study also showed that students wasted 15 percent less food when they were exposed to slogans such as “All Taste . . . NO WASTE,” according to Reuters Health.

“Really the only substantive study people were referring to was this industry study,” Kim noted. “We made the argument that you can’t entirely trust the industry . . . The industry studies showed no methodology on how they came up with this number. They simply said, ‘We surveyed a bunch of places and they show a 30 percent reduction in food waste.’ But how do we know it’s a scientifically credible study?”

The original 2009 AU study was a good start in correcting that deficiency, but Kim wanted to tighten up its rigor and methodology. So over six days in February through March 2009, Kim and his environmental science students made dining hall trays selectively and randomly available or unavailable during lunch and dinner. The students collected dishes from the students and weighed food waste.

Results for the 360 diners surveyed, showed that going trayless:

Those findings, Kim and his coauthor noted, suggested that “removing trays is a simple way for universities and other dining facilities to reduce their environmental impact and save money.”

The original 2009 study followed a failed attempt by food service provider Bon Appetit to institute a trayless policy at AU based on industry figures. The students didn’t buy it. So the manager overseeing the Terrace Dining Room approached Kim about conducting a student survey.

Teaming up with Darrell Hayes’s School of Communication PR class, which developed a campaign to let students know what was going on, the study was conducted, showing a 30 to 40 percent reduction in waste depending on the meal. This time, without the onus of a top-down solution being imposed on them, students embraced the sustainability implications of eliminating so much waste—except for a few students wondering what they would use as sleds during a snowfall.

So the class assembled a report and presented it to Bon Appetit, AU’s Office of Sustainability, and the Office of Finance and Treasurer. Just like that the trays were gone.

“That link between carrying out scientific studies, making policy recommendations, and those recommendations being accepted so quickly was very gratifying to the students,” Kim said, adding that never before or since has he seen such quick results from research.

In his current research paper, Kim noted that each day AU’s dining halls serve about 3,200 meals, and that removing trays reduced food waste by 12,000 kg (26,455 pounds) per semester.

Perhaps just as important is the message that having such a real-world impact has on students.

“These opportunities really give them a sense of being able to think about solving problems based on a good set of facts, data that can be collected relatively easily and straightforwardly,” Kim said.

“A lot of students think of science as something a small group of people do,” Kim said. “But these are things we do not just as scientists but as individuals where we try to understand how the world works. We employ the scientific method in our lives every single day.” 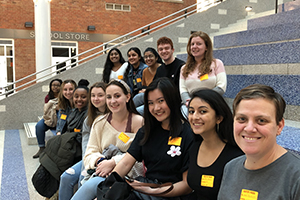