When you are curious about something, how do you go about learning more? Are you like a butterfly, busily collecting stories and pulling them all together loosely?  Or a hunter, methodically tracking down secrets and discoveries? Or a dancer, taking creative leaps of imagination and creating loopy networks of knowledge?

Or perhaps you are a combination of the three—or more. In all, three styles and 18 models of curiosity have been identified in a new book, Curious Minds: The Power of Connection (MIT Press), co-written by American University’s Perry Zurn and his identical twin, University of Pennsylvania Professor Dani S. Bassett.

Perry Zurn (he/him) is an associate professor in AU’s Department of Philosophy and Religion and affiliate faculty in the Department of Critical Race, Gender, and Culture Studies. He researches political philosophy, critical theory, and trans studies, and he collaborates in psychology and neuroscience. Dani S. Bassett (they/them) is the J. Peter Skirkanich Professor at the University of Pennsylvania, with appointments in the Departments of Bioengineering, Electrical & Systems Engineering, Physics & Astronomy, Neurology, and Psychiatry.

Their areas of interest and expertise might make these identical twins seem like opposites. Yet Zurn and Bassett are extraordinarily close, merging their research, finishing each other’s thoughts—they even shared their own private language as children. Curious Minds is the culmination of seven years of collaboration between them, pooling their respective expertise in the humanities and the sciences. They say it “represents the thought of one mind and two bodies.”

A Drive for Connections 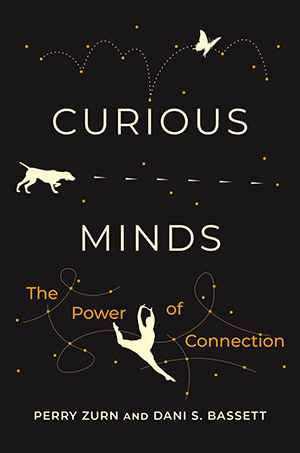 The book’s message is that we’ve been thinking about curiosity all wrong. “For thousands of years, curiosity has been thought of as a drive to acquire new information,” Zurn explains. “But curiosity is more like a capacity to make connections. It’s wanting to connect different elements of our worlds, to connect people together, and to connect ideas and concepts, aspirations and visions. Curiosity builds knowledge networks in our brains and across our societies, and to do that, you need to build connections.”

When it comes to the three styles of curiosity—busybody, hunter, and dancer—they were first identified by Zurn, who noticed them surface repeatedly in the history of philosophy. Bassett recognized the same styles in human behavior. Collaborating with U Penn communications scientist David M. Lydon-Staley, they tested these archetypes among Wikipedia users.

“Surprisingly, the archetypes hold true! People really do navigate their information-seeking with different styles of curiosity,” says Zurn, adding that the styles are not rigid. Many people use different styles in different contexts, for different purposes, and even at different times of the day. By the end of the project, Zurn and Bassett had identified an additional 18 models of curiosity.

Zurn and Bassett took turns writing chapters, each from the perspective of their fields—and other fields. The genre-busting book is written to appeal to general audiences as well as academics, and it weaves together neuroscience, philosophy, history, natural science, and even poetry as dictated by the irrepressible curiosity of its authors.

The result has been described as “a brilliantly original exploration of curiosity,” by Barbara M. Benedict, author of Curiosity: A Cultural History of Early-Modern Inquiry. Angela Duckworth, author of the New York Times bestseller Grit, wrote, “Zurn and Bassett changed my mind about what curiosity is at its essence. I am now convinced that curiosity is more than wanting to know—it is wanting to connect. This bold new theory for curiosity has enormous implications for building a more curious, creative, and equitable society.” A review in The Guardian said, “Zurn and Bassett explore everything from Plutarch to Google algorithms… Neither Zurn nor Bassett are technically historians, but you wouldn’t know it from reading their book… In fact, the book is outlandishly multidisciplinary….”

The Path of Curiosity

Zurn and Bassett’s interest in curiosity can be traced back to their childhood in the foothills of the Allegheny Mountains, where their mother homeschooled them and their nine other siblings from preschool through twelfth grade. “We learned to drive in a 15-seat van,” Bassett recalls, laughing.

The twins grew up surrounded by natural beauty and books, and they were encouraged to read and explore whatever subjects interested them. “Curiosity stuck with us, and it’s a big part of our jobs,” says Bassett. “We wake up every morning, and we figure out what the question is that we’re most excited about, and we go find the materials, and work on it. So, it feels like there is a deep continuity between our home schooling and our academic careers.”

Zurn agrees. “Our mom is really an artist at heart, and I think it’s her creativity that informed the way she raised us, especially the interdisciplinarity of our education. I don’t think she was ever committed to ‘this is what science really is,’ or ‘this is what writing should be.’ She was always messing with common narratives and existing value structures, and she allowed us to live in the blurry areas between things. I think that has made us far more transdisciplinary as scholars. It’s how we were introduced to what learning looks like.”

The book began about seven years ago when Bassett was a postdoc and Zurn was finishing up his PhD, writing his dissertation on the philosophy of curiosity. Bassett was investigating the brain’s role in learning, using fMRI scans to show that people who exhibit more flexibility in their brain communication patterns learn more the next day than people who have less flexibility. This was the spark that got the twins talking about curiosity—and ultimately the idea of joining forces to write a book. They spoke with MIT Press about bridging their knowledge of science and philosophy to excavate new terrain in the study of curiosity. The neuroscience editor was very excited about the proposed content, but a little less certain about how the writing process would work.

“We told him we would take turns writing chapters, and he underscored that the writing needs to feel consistent all the way through,” Zurn says. “But interestingly, as we worked together for so many years, our writing styles came closer and closer. There were moments when I would read a paragraph that Dani wrote, and I would say, ‘Wow, that sounds like I wrote it.’ And Dani would do the same. The merging of our styles is perhaps a natural outcome of our collaborations: to date, we’ve published 23 papers together.”

When asked if curiosity can be learned, Zurn says yes, there’s hope for everyone to expand their curiosity. “People often think of curiosity as a personality trait—a kind of inner spark that we just have or don’t have, whether about one topic or another or about life in general. The more we studied curiosity, however, the more we were convinced that curiosity is something we practice,” he explains. “Being curious is something we do, more than something we are. Lynn Borton (of the Choose to be Curious podcast) calls curiosity a muscle and encourages her listeners to exercise it.”

This spring, Zurn will teach a curiosity seminar, and Bassett is already teaching a course this fall that explores the styles of scientific curiosity. “Curiosity is a topic that many students naturally gravitate to. What questions do we ask in science? How do we formulate good questions? What even is a good question? How do we initiate big ideas and guide the advancement of science? In my course, we examine these questions and seek answers by drawing analogies between the movements of the mind through idea space and the movements of animals through physical space. Creatures then become models of curiosity for the human mind,” Bassett says.

Zurn and Bassett hope the book encourages readers to rethink what they know about curiosity. “If curiosity connects, we need to ask who and what it is connecting (across communities, fields, and contemporary challenges). And if curiosity has styles, then we need to think much more expansively about what curiosity looks like in practice, especially in the classroom and the workplace,” Zurn says.

Why pick up the book? Zurn and Bassett still have more questions than answers, but that’s as it should be. Bassett invites readers to, “Come get curious with us about curiosity!”