June is Lesbian, Gay, Bisexual, Transgender, Queer, and Intersex (LGBTQI+) Pride Month. It’s a time to celebrate. But it’s also a time to reflect on progress made in the fight for equality and justice. Though the LGBTQI+ community has come a long way, its gains are being threatened in many states across our nation.

What does Pride Month mean to you?

For me, it’s an important reminder of the need for queer community and solidarity. Living in a place like DC and working at a place like AU, it can be easy to forget that I live in something of a bubble, one where sexuality (at least of the white, cis, gay, professional variety) is something of a quotidian nonissue. At its best, Pride Month can make us aware of the continued marginalization and persecution of queers while also being a radical celebration of queer joy and survival in an often hostile world. It’s an opportunity to affirm publicly the history, beauty, bravery, joy, sorrow, and even the delightful messiness of the lives of sexual and gender nonconformists.
-Dustin Friedman

I grew up in a world of shame. I traffic, regularly enough, in worlds that—overtly or covertly—continue to tell me I should be ashamed—of being queer and especially of being trans. Pride is something I feel intermittently, unreliably. But it is often buoyed by the company of someone who sees me, this part or parts of me, and smiles either out of love or out of knowing. Or when I in turn smile at someone else who is “part of the family.” This thing is indeed something worth celebrating.
-Perry Zurn

I love Pride month. My very first Pride celebration was in Salt Lake City, Utah, in 2004. I was twenty-four and barely out of the closet. I remember feeling euphoric and overwhelmed by the sense of community, the celebration of a public queer life, and a general sense of comradery with others. Celebrating, whether privately with our friends and in our own ways, or out in the streets marching in parades, is an opportunity to remember the work of our queer ancestors to whom we are indebted, and an opportunity to harness the celebratory energy Pride creates to get back to the work of the fight that remains before us.
-K. Tyler Christensen

For me, Pride Month is a time to honor the first activists who gave our community visibility and fought for the rights we have today. People like Frank Kameny, Barbara Gittings, Audre Lorde, Harvey Milk, Marcia P. Johnson, Larry Kramer, Bayard Rustin—the list goes on and on—deserve to be remembered for their courage and tenacity.
-Bob Connelly

For me, Pride Month is for all those whose lives depart from the cultural status quo regarding gender and sexuality, as well as for those who voluntarily choose to affiliate themselves with such communities. I know that there are complaints about how Pride has been coopted by straight, cisgender people who treat it like nothing more than a monthlong party, but I feel confident that (for some people, at least) even a superficial engagement can eventually lead to more serious and thoughtful political commitments.
-Dustin Friedman

Today, Pride Month is heavily commercialized. As such, many people “celebrate” it who have no real intimacy with or commitment to queer and trans community, little to no awareness of the rights and access we struggle for, and no familiarity with our histories. If this describes you, let me invite you to do better. And for those of us within or close to the community, we too would do well to learn more about our multiple histories and struggles, and to show up to those fights not just the party.
-Perry Zurn

Although the LGBTQI+ community has come so far, there are still so many obstacles (and legislation) to overcome. Can you address the biggest threats to true equality right now?

There is a surge of legislation being considered today that is designed to deny and even rescind the rights of Americans. It’s vital that LGBTQI+ people come out and make their voices heard above the misinformation circulating through various forms of media. By doing so, we can debunk the myths that haters use to give their crusades traction.
-Bob Connelly

I think it is important to recognize that true equality for the LGBTQI+ cannot be achieved in isolation from other justice struggles. Recent state-level bans on transgender healthcare for children, including in some cases punishment for parents who seek to affirm their trans children, are absolutely horrifying. These legislative moves cannot be considered apart from hysteria against Critical Race Theory, book banning, and assaults on women’s reproductive rights. This is a multi-front war against anyone who is not white, male, cisgender, and heterosexual, and as such it requires a multi-front strategy grounded in solidarity among oppressed groups.
-Dustin Friedman

The suicide statistic (45 percent of LGBTQI+ youth have considered suicide in the past year) is deeply troubling. Why are LGBTQI+ youth at such risk? What can be done?

The statistics on suicidality among queer and trans people, especially youth, are indeed staggering. We have an immediate need for mental health care, safe housing initiatives, and queer and trans affirming education and employment. To build a world of greater belonging and to combat a sense of isolation and gender failure, moreover, a greater variety of queer and trans visibility is critical, not only in mainstream media but also inside our own leadership, our own stories, and our own dreams.
-Perry Zurn

LGBTQI+ youth live in a world where the everyday violence (physical, emotional, and otherwise) they encounter is authorized and even encouraged by powerful people whose voices are amplified by the mass media machine. This can only be remedied by a society that has comprehensively committed itself to ensuring the safety of all children both in its words and its actions—a situation that recent gun control debates have shown is tragically far from being a reality.
-Dustin Friedman

Non-profits like The Trevor Project are devoted to suicide preventative efforts for LGBTQI+ youth. Giving these organizations our support is a significant way we can help.
-Bob Connelly

What would the passage of the Equality Act mean to you? What kind of a world would you like to see in the future for the LGBTQI+ community? 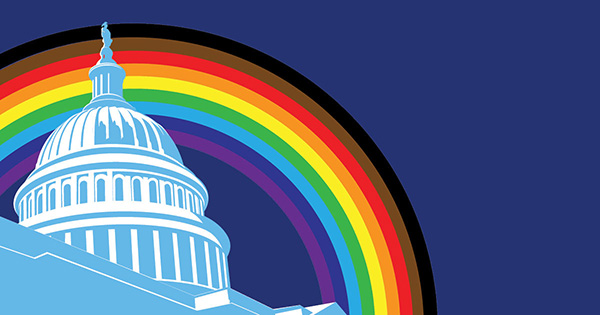 The passage of the Equality Act would be an important milestone and affirmation, to be sure, but in the future I would like to see more solidarity between queers in the global West and queers in the rest of the world. While many people believe that North America and Europe are relative safe havens for queer people, the fact is that the oppressions faced by queers in the non-Western world are often the direct result of oppressive laws and sexual/gender norms that were introduced by Western colonizers, and that have since been exacerbated by neocolonial economic and political conditions.

I would like to see us move beyond simply celebrating the (limited) freedoms we have here, and instead focusing on how we can improve the lives of queers around the world without ourselves embracing a neocolonialist “savior” complex about it.
-Dustin Friedman

Legal protections and policies are one way to pursue a better world. But they are not the only way. And while we have much more work to be done around queer and trans inclusive policy in our country and on our own campus, I think it is crucial to build and support community structures and community collaborations through which true belonging happens. When I imagine queer and trans futures, I dream of the many ways in which we make each other, craft our stories, our struggles, and our hopes — and the poetry of that.
-Perry Zurn