Search for Saipan on Google Maps, and you have to zoom out six times before any easily recognizable land masses come into view. The 45-square-mile island—slightly smaller in land area than Washington, DC—is part of the Commonwealth of the Northern Mariana Islands, a US territory in the middle of the Pacific Ocean, roughly equidistant from the Philippines, New Guinea, and Japan. Although one might expect environmental conditions in such a far-flung locale to be pristine, Saipan’s coral reefs and coastal seagrass beds face many of the same threats as those in other parts of the world: a warming and acidifying ocean, sea level rise, invasive species, and nutrient pollution from human populations on land. It was the last of these that brought me, along with my colleague Kiho Kim and senior environmental science major Alexandra Morris, to the island in March 2018.

Our goal was to identify hotspots of nitrogen pollution. “Nitrogen generally favors macroalgae over corals, so a nitrogen-polluted reef, over time, will change from being coral-dominated to algae-dominated,” Kim explained. This shift from corals to algae harms not only the corals themselves, but a plethora of fish and marine invertebrate species that form the backbone of the island’s economy, which relies heavily on tourism and fishing.

Joined by two other researchers from Hong Kong University, we collected water samples at half-mile intervals over the island’s western coastline and from Laulau Bay on the southeastern side. We were looking for radon, a naturally occurring radioactive gas that can pinpoint where groundwater is seeping out into the ocean. Saipan receives an average of 75-90 inches of rainfall annually, but its west coast has no perennial streams, meaning that groundwater flow would be especially important for transporting pollutants from inland sources to the coast.

The radon results showed one particular stretch of coastline, about three miles long, with high groundwater input. Knowing the location of this high-groundwater area will help us focus our sampling efforts when we return to the island in August for a second sampling campaign. We will also be able to compare corals, algae, and seagrasses in places with and without groundwater input to see if there is any evidence that groundwater is affecting their abundance and health.

While I focused on analyzing radon, Kim took to the water with his snorkel, collecting algae and seagrass samples from each site. Hidden within the plant tissue was information about the sources of nitrogen pollution. Like many chemical elements, nitrogen atoms come in multiple types, or isotopes, that differ by weight. Fertilizer, sewage, and other nitrogen sources each have distinct isotopic signatures, and when plants absorb nitrogen from the water they preserve that signature in their tissues. Isotopes can distinguish algae that looks exactly the same to the human eye, showing which plant got its nitrogen from sewage and which from natural sources.
“Ultimately, our work will provide evidence of where and how much nitrogen pollution is entering the coastal oceans, which will help the local agencies target their responses to mitigate it.” Kim explained.

The trip allowed Morris, who is graduating in May and beginning a master’s program in marine biology at the University of West Florida in the fall, to get first-hand experience as a field scientist. While in Saipan, she spent several days working an independent project focused on developing a method to extract DNA from seagrass tissue in order to study the plants’ genetic biodiversity. “We can use the genetic diversity of the grass around the island as one proxy for overall island health,” she said.

Morris has worked in Kim’s lab since freshman year and credits him with opening up many doors for her. “I have learned so much about the ups and downs of the research process through this seagrass project. Kim is a great mentor because he always pushed me to apply for new things and really reach for what I wanted in life.” She added that studying environmental science at AU, rather than at a larger university, helped her balance academic passion for the ocean with the demands of playing varsity field hockey. 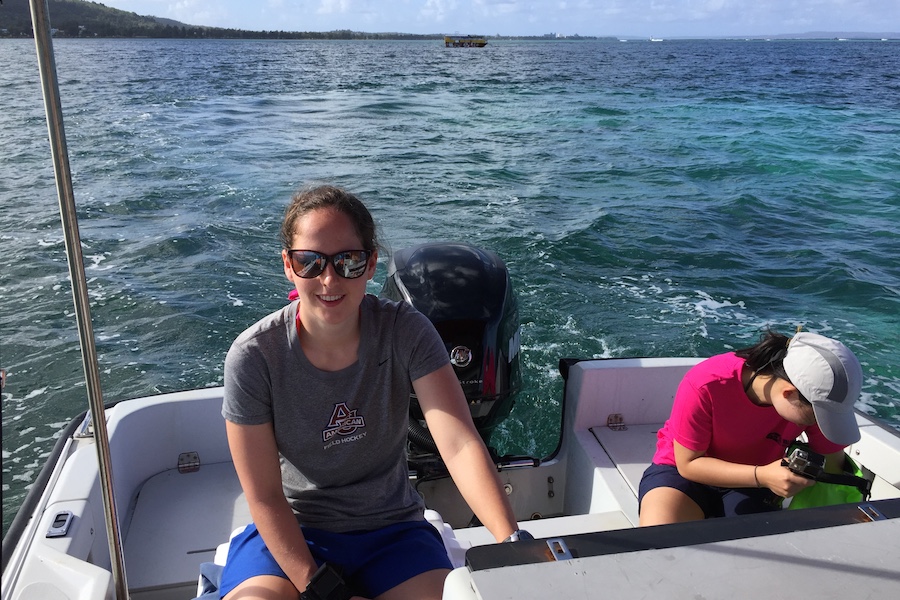 Alex Morris driving the boat used to collect water, seagrass, and algae samples from the reef.

Involving undergraduates in field work benefits faculty mentors as well. “One cannot be a marine ecologist without spending time in the ocean,” reflected Kim, who has been doing coral reef research in locations including Panama, Florida, and Guam since his graduate school days. “So being able to take students into the field is a real treat for me, as much as I think it is for the student. Being in the field is an all-consuming experience where the students and I are learning together, and where we put our knowledge and skills towards a research goal.”

In this case, our research goal also has a solid real-world application: to give Saipan’s coral reefs a better chance of survival. We hope that local environmental managers will be able to reduce nitrogen pollution to the reefs, keeping them competitive against macroalgae and buying them valuable time to adapt to the changes that lie ahead.