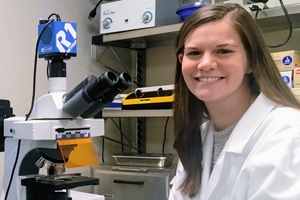 Linda Amarante is researching the brain’s frontal cortex and its role in reward-based decision-making with food.

For American University graduate student Linda Amarante, softball is an enduring passion. It’s not only her sport of choice, but it influenced how she thought about decision-making itself. That curiosity helped fuel her interest in neuroscience.

“The biggest thing for me was the decisions you make when you’re up to bat. You have to make a split-second decision on whether to swing,” Amarante says. “So, I was really interested in my own personal experiences. Why do I choose one thing over another? What is making me do that consistently?”

Amarante is earning her PhD in behavior, cognition, and neuroscience. Working under biology professor Mark Laubach, she researches the brain’s frontal cortex and its role in reward-based decision-making with food. “We think that the frontal cortex is signaling something, or helping out in this process to signal that, ‘Yes, I like this food, and I’m going to eat it now.’ Or, ‘No, I don’t like this,’” she explains.

A fourth-year doctoral student, Amarante is in the second year of a prestigious National Science Foundation graduate research fellowship, which helps with tuition and living expenses. She also recently won a Cosmos Club Foundation award that provides research supply money to grad students in the DC-Maryland-Virginia area. Another 2018 Cosmos award winner, Dorian Russell, is earning her MS in environmental science at AU and conducts field research in the forests of Costa Rica.

Amarante says her research could have ramifications for individuals struggling with eating disorders. The frontal cortex, she notes, is involved in self-control, or what’s called executive functioning. “With both obesity and with anorexia, there’s a loss of self-control, and we think that this is due to aspects of the frontal cortex not being able to adequately signal that control,” she says.

In a Journal of Neuroscience paper published with Laubach and another researcher, they found that when rodents consume sweeter water, their frontal cortex signals indicate a higher value reward. She also studies the brain’s insular cortex, which processes aspects of rewards and values.

Amarante grew up in Cheshire, Connecticut, and got a softball scholarship to play at C.W. Post on Long Island (now known as LIU Post). She pitched and played first base, and that “decision-making problem” for her was the low and outside pitch—even if it was in the strike zone.

“I just would not see it as a strike or something I should swing at. And no matter what I did, I couldn’t change my choice. I was just stuck in that rut,” she says now.

Her father, Joe, is a veteran journalist at the New Haven Register, and she majored in English and considered following in his footsteps. Yet an introductory psych class got her hooked on the brain, and she added a psychology major. After graduation, she took a research assistant position under Laubach at the John B. Pierce Laboratory, which is affiliated with Yale School of Medicine. When Laubach was offered a position at AU, she applied for this doctoral program and now works with him on campus.

Her favorite AU classes included neuropharmacology with Anthony Riley, and Laubach’s course on techniques related to the Obama Administration’s BRAIN initiative. “This program has a lot of flexibility,” she says. “We can take different courses that are relevant to our interests.”

Now finished with her coursework, she’s hoping to complete her doctorate in 2019 and parlay that into a post-doc fellowship. And she’s consulted with Laubach about future research and career plans.

“He really emphasizes work-life balance and truly being happy in doing what you love,” she says. “And he’s always believing that you can do the next task.”

Amarante is trying to balance her schedule, and softball still occupies a prominent place in her life. Currently, she’s in two adult softball leagues, one in DC and another in Virginia. Amarante also utilizes her sport to give back. She’s a volunteer mentor with the Washington Nationals Youth Baseball Academy, a program that assists children in underserved DC communities. She started out teaching STEM and literacy, moved on to team- and character-building activities, and she also served as a summer coach.

“I’m just learning from these kids,” she says. “They are amazing kids and they deserve all the chance in the world, and unfortunately don’t always get it.”