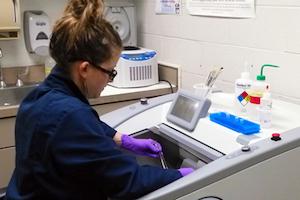 Most people who use drugs like cocaine or opioids do not become addicted to them. Only about 20 percent of people who have ever taken cocaine end up with cocaine use disorder, the field’s term for what is often more commonly called addiction. But this statistic should not be taken to minimize the seriousness of drug addiction. By definition, people meeting criteria for a substance use disorder diagnosis experience clinically significant impairment or distress related to their drug use. In other words, drug use is wrecking their lives.

Why do 20 percent of cocaine users become addicted? What makes them different from the majority of cocaine users who do not become addicted? Is the explanation more about the environment individuals find themselves in, or is it something about the individual? Surprisingly, we know very little regarding the answers to these questions. My research, funded by a $1.5 million grant from the National Institute on Drug Abuse (NIH), attempts to answer these questions. I use an animal model where rats are allowed to press a lever to obtain a small intravenous dose of cocaine. The intravenous route of administration allows for a quick onset of action. It takes just a few seconds for the cocaine to get from the blood to the brain. In this respect, the rat’s experience is like that of a person smoking crack, which also takes just a few seconds for the effects to be felt. Most rats learn to press the lever to obtain cocaine doses at regularly spaced intervals.

A rat pressing a lever for cocaine does not necessarily resemble addiction, however. This behavior alone is likely more representative of the majority of human cocaine users who do not become addicted. The field of addiction research has only relatively recently come to appreciate this distinction between non-disordered and disordered use in animal models. And so, within the past decade, focus has shifted from observing rats’ simple self-administration of drugs like cocaine to studying behavior in situations where addiction-like behavior can be seen. One of the hallmarks of addiction, which is also one of the diagnostic criteria for substance use disorder, is giving up recreational, social, or other non-drug-related activities in order to use drugs. Researchers have developed methods designed to model this behavior. In the choice procedure, rats are allowed to choose between a cocaine infusion and what is called an “alternative reinforcer”—typically a treat like a food pellet or drop of sweet fluid. It is a mutually exclusive choice. If rats choose cocaine, they give up the non-drug treat. This is meant to create a situation where that hallmark of addiction—giving up non-drug activities in favor of the drug—might be observed.

A number of studies over the past few years have shown that rats, much like people, differ in the extent to which they will choose cocaine over other reinforcers. Some rats pick cocaine almost every time while others pick the sweet drink. But we do not know whether individuals who consistently choose cocaine over alternative reinforcers do so because they place an especially high value on cocaine or because they place an especially low value on the alternatives. Similarly, we do not know whether individuals who consistently choose the alternative do so because cocaine is of low value or because the alternative is of high value. Behavioral economics provides methods of obtaining precise measures of the value of a reinforcer. With humans, we can value things in terms of dollars. But we cannot do that with rats. Instead, rats pay for their reinforcers with lever presses. We train them on a procedure where the prices of cocaine, food, and saccharin are gradually increased over days by increasing the number of lever presses they must make to get these reinforcers. From the way their behavior changes in response to price increases, we can determine how much they value each option.

We found that, like most humans, most rats placed a relatively low value on cocaine. They placed a much higher value on food. They valued cocaine and saccharin about equally. We then allowed them to make mutually exclusive choices between cocaine and the alternative. The main finding was that the consistent cocaine preferers—the subset of rats resembling addicts—placed unusually high value on cocaine and relatively low value on the non-drug alternative, whether it was food or saccharin. All rats were treated the same and had the same early life experiences. So this does not appear to be an effect of environmental influences, but instead is related to innate factors specific to the individual. These results also suggest that cocaine choice can be reduced by either lowering the value of cocaine or increasing the value of the non-drug alternative. We tested this idea in another study. In one group of rats, the non-drug alternative—saccharin in this case—was relatively scarce and in another group it was abundant. We thought that saccharin would be of higher value when it was scarce. This turned out to be the case. Rats in the group where saccharin was scarce chose cocaine less frequently than the group where saccharin was abundant. We are also testing other ways of manipulating the values of drug and non-drug reinforcers. In so doing, we hope to identify factors that lead to high drug preference, which we think may ultimately help us understand why people become addicted to drugs.