Philip Piatt (TESOL Certificate '15) tells us how he became interested in teaching English and about his wonderful experience in Peace Corps in the Republic of Georgia! He also gives advice to current TESOL students.

It was first the desire to work and travel abroad that made me want to teach English. While working as a court reporter in DC three summers ago, I took an accelerated course of study at AU to get my TESOL certificate in one extremely busy summer. At the same time I began volunteering as a teacher at the Washington English Center. This proved to be an encouraging tryout, and allowed me to appreciate the subject itself. Seeing improvement in students’ skills was extremely gratifying, and besides, I love an audience. Events proceeded quickly from there.

For the past year and a half, I have been serving a Peace Corps assignment in the Republic of Georgia, in the field of English Education. The Peace Corps’ English Education Project aims for improvement in students’ English proficiency, critical thinking, gender sensitivity and teamwork, while developing English teachers’ own communication skills and teaching methodology and expanding learning resources for the community at large. My job as a Peace Corps volunteer is to work with Georgian teachers to build their capacity to teach English — this often means helping them to improve their own English — and together, we work with students to promote English language learning.

This broad mandate recommends both facilitating improvements in the minutiae of teachers’ routines, as well as long-term community projects. With an eye toward the former, for instance: weekly lesson-planning sessions following a template (novel for many teachers), peer observation and feedback, classroom management techniques, and extracurricular student clubs. The last initiative addresses what I view to be the greatest hindrance to our students’ English learning: opportunities to use English extemporaneously, outside of lessons, on subjects of personal interest.

Georgia is bounded by the Greater and Lesser Caucuses, whose beautiful mountains dominate the scenery. My site is in the region of Samegrelo, in the northwest. It is a green and hilly place. Georgian is the national language, but on the street and in the home in this region it often comes mixed with Megrelian, the local dialect.

My Georgian counterpart teachers and I have recently secured a grant to furnish an English “Laboratory” in an unused classroom. We will install a computer, projector, printer, and speaker attachment to allow for multimedia activities in lessons and clubs, hopefully stimulating greater student participation. In our school, teachers rotate between the rooms in which each grade resides. This new Lab will allow our English teachers to consolidate their resources, teaching aids and materials in one location as such materials accumulate.

Georgia is a small and “high-density” Peace Corps post. With so many other Volunteers in nearby towns and villages, we can collaborate on regional and nationwide initiatives. This time of year, the National English Spelling Competition gets underway, followed by the worldwide WriteOn! English creative writing contest. In last year’s WriteOn! competition, one of our school’s tenth graders came in first for his grade for all Peace Corps country posts worldwide with a highly amusing story in response to a creative writing prompt about meeting one’s doppelganger.

The pace changes during the summers for English Education volunteers. Committees of Volunteers organize several overnight camps for students with a variety of themes. In July, a group including myself managed LIFE Camp (Leadership Integration and Fitness through Education) at the Kolkheti National Park in the city of Poti on the Black Sea. This annual weeklong camp for high-school-age boys and girls instructs campers on teamwork, volunteerism, and healthy living through workshops, presentations, and lots of outdoor sports and excursions.

Demand for Volunteers exceeding supply, I have been dividing my time between the two public schools in our small town. This dual assignment is an arrangement in the trial stage at our country’s post, testing the extent to which the impact yielded by having a greater number of counterparts and students compensates for less time spent with any one group of them.

English is an education priority for the Georgian government, and students start lessons in the first grade. The younger generation, on average, has much better English skills than their parents and grandparents, though it will not soon displace Russian as the national second language, which students are also required to take. Nevertheless, all of my grade levels contain at least some exceptional and self-motivated English learners, and outside tutoring is extremely common.

Motivating the underperformers is an ongoing challenge. There is an unfortunate tendency for low-motivation students to be overlooked in lessons in favor of those students who have the confidence to volunteer in every exercise and activity. Without intending to, teachers can sometimes focus too much on those high-performing pupils, as they appreciate their output and classroom engagement. Incorporating group competition into lessons has been the most sure-fire way to guarantee focus, and especially to engage those less proficient students who either out of embarrassment or disinterest do not usually willingly participate.

The Peace Corps is the coolest thing I have ever done, and it validates my decision to study TESOL. My advice to current students would be to follow the research and literature after graduating, seek out opportunities to work abroad (as a volunteer or otherwise), and to keep in touch with classmates and colleagues. Also: never stop learning other languages!

It was first the desire to work and travel abroad that made me want to teach English. 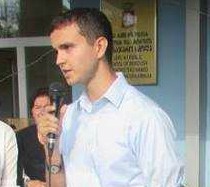