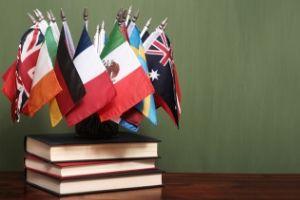 The field of International Relations (IR) has been criticized for being both Western-centric and male-dominated—focusing disproportionately on the United States and Western Europe and leaving issues that are of particular concern to women unaddressed. These biases may unintentionally be reflected in the teaching choices made by professors, who introduce and frame the IR field to their students.

SIS professor Sarah Knight’s recent research published in International Studies Perspectives evaluates geographic and gender bias in undergraduate IR teaching. We checked in with her to ask a few questions about her recent article.

Q: To evaluate the claims of bias in undergraduate IR instruction, you analyzed 48 syllabi and 2,234 required readings for undergraduate introductory IR courses taught in ten countries. Why did you choose to analyze these particular documents?

Course syllabi are excellent data sources to examine biases in IR teaching because they reveal which readings, theories, and topics professors include in their courses, and, just as important, which readings, theories, and topics are left out. In this study, I look at three features of each syllabus. First, I examine the authors of required readings, including each author’s country of residence, country of PhD training, and gender. Second, I look at which theories are included and, in particular, whether the professor includes feminism and non-Western theories on the syllabus. Finally, I examine which topics and events are on the syllabus, namely whether any of those topics and events involve the non-Western world or are focused specifically on women (such as, for example, rape as a tool of war). Syllabi cannot capture all of the nuances of teaching, of course, but they are an important data source to examine biases in teaching.

Q: As part of your sample, you included and analyzed your own syllabus for your introductory IR course. How did it compare to the other syllabi in your study? What did you learn about your own biases?

American University was included in the sample of universities for this study. Because, until recently, I was one of the professors who taught the introductory “World Politics” course at SIS, I included my own syllabus. Much to my surprise, my syllabus was one of the “worst performers,” particularly in terms of the gender bias. I assigned very few readings from female scholars, and I did not cover feminism. My syllabus did a little better than others on covering historical and current events outside the US and Western Europe, but my syllabus still was overwhelmingly focused on the West. I saw that many other professors were doing a better job than me at incorporating female and non-Western voices and topics into their syllabi, and, since completing the project, I’ve taken a hard look at all of my syllabi to try to incorporate more of these voices and topics.

Q: Your findings reveal that teaching is overwhelmingly American-dominated and male-dominated in undergraduate introductory IR classes. What is the impact of these teaching choices on the IR field and why are they problematic?

Something that surprised me is that the American dominance and male dominance on course syllabi holds even when looking at courses taught outside the United States and courses taught by female faculty. So, the geographic and gender biases are pretty pervasive across the sample. The impact of these biases is multifaceted. First, even though there are many non-US and female scholars of IR producing important work, this work is not getting much of a platform in Introduction to IR courses. We also know from prior research that US scholars and male scholars of IR are more likely to pursue statistical research in IR over other, qualitative methods. Male scholars are also more likely to focus on certain aspects of IR, namely international security. Therefore, the dominance of US and male scholars on these syllabi means that students are experiencing a narrower IR field than they would be if more voices were included.

Q: You write that IR professors “serve as important gatekeepers to the field for their students.” How can professors and universities reduce geographic and gender biases in their teaching?

We know from prior surveys of IR professors that most are aware of these biases and consider them a problem for the field. And yet, my study and several others demonstrate that the biases are still firmly in place. I speculate that IR professors may be experiencing something that psychologists Pronin, Gilovich, and Ross call a “bias blind spot,” in that people tend to recognize bias in others but are convinced of their own objectivity. One way to combat the bias blind spot would be for faculty to look at their own course syllabi and see how it compares to some of the other syllabi in this study. Is their syllabus, like mine, one of the worst performers? Where can changes be made? Universities can support these efforts by encouraging and even rewarding faculty to make these sorts of changes.