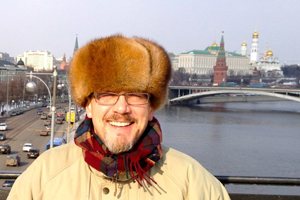 For Department of Language and Foreign Studies professor José Badué’s doctorate in Jewish history at Columbia University, he had to learn Hebrew. (For someone who today reads, writes, and speaks seven languages, this wasn’t a daunting task.) But the grant he received from Columbia wasn’t enough to fund his studies, so to supplement, he applied to be a substitute teacher in New York City public schools. “Stuyvesant High School called me because they saw I spoke Hebrew,” he says. “I started teaching as I was going to school and I just fell madly in love with it. I really loved these kids.”

In order to keep his teaching job, he had to get a teaching license. “I had to suspend my doctoral work and go back to get my master’s of teaching in Spanish,” he says. During this time, he started publishing parts of his unfinished doctoral dissertation in various foreign-language journals around the world. “I gave up on my PhD and just started translating en masse.”

Since then, Badué has translated everything from the Pulitzer Prize-winning play Anna in the Tropics by Nilo Cruz to 2003 National Book Award winner Carlos Eire’s Waiting for Snow in Havana to “chick books.” He has also continued teaching, and before coming to AU, he taught seventh and eighth grade Spanish, as well as Latin and AP Spanish literature in the upper school, at the Bullis School in Potomac, Maryland. While at Bullis, he got a commission for a big translation with Random House to translate a collection of Spanish poetry of the twentieth century into English.

Badué hopes his students go on to use what they learned in his translation classes when applying for jobs after college. “I tell my students that with this skill, they can get a job somewhere,” he says. “It’s not only academic. You have the bravery, the cojones, to say, this is the way it should look. This is what the author meant.”

In his classes, Badué tells his students to read as much as possible, even the same thing in different languages, and that a knowledge and respect of history is important as well. “Words change over time,” he says. “The way you would have translated something in 1920 might not be the way you’d translate it now. You have to take history and culture into account.”

He’ll have to do just that with his new commission from the Pushkin Institute and the Gulag History Museum in Moscow, Russia. He was contracted to translate all of the museum’s materials from Russian into Spanish, English, and French, culminating in writing the catalogue for the whole exhibit.  He anticipates that this will be a three- to four-year project. He’s currently working on the official documents that are part of the exhibits, and then he’ll tackle their website.

While Russian is his newest language—he also knows English, Spanish, French, Portuguese, Italian, and Hebrew—he was able to dedicate a solid chunk of time to learning it. Badué was teaching at Stuyvesant on September 11, and immediately afterwards, he got sick. “I had problems with my breathing because I was downtown,” he says. “I was hospitalized for about three weeks in intensive care. I got a Russian book and taught myself Russian while I was in the hospital.”

Badué will spend the summer in Russia working with the museum. “All of this material has to be reedited, redone, re-explained, because they talk a lot about names, for instance, that we would not understand,” he explains. “It’s a lot of work, but I’m already having so much fun.”