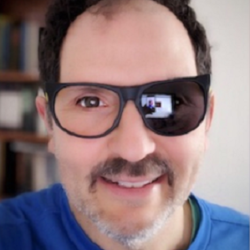 Arthur Shapiro is a Professor of Psychology and holds a joint appointment in Computer Science at American University in Washington D.C. He is also closely affiliated with American University’s Program in Behavior, Cognition and Neuroscience and the Center for Behavioral Neuroscience. He is co-editor of the Oxford Compendium of Visual Illusions (2017) and has won international awards for visual illusions he has created. His research primarily focuses on color and color contrast perception, motion perception, perceptual organization, and low-light-level vision but he is interested in any question that relates to how the brain constructs our perceptual world. He is actively involved in public engagement in science and is the presenter and scientific consultant for two seasons of shows on visual illusions produced by www.CuriosityStream.com.