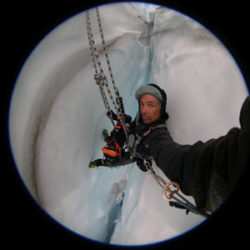 Larry is a Daytime Emmy award-winning producer, writer, director, and cinematographer now in his fifth decade of filmmaking that spans all seven continents. He’s worked on over 250 projects for domestic and international broadcasters and cable channels. Currently, Engel is an associate professor at American University’s School of Communication, associate director of the Center for Environmental Filmmaking, and filmmaker-in-residence with the Investigative Reporting Workshop. He is an affiliate faculty with both the Center for Latino and Latin American Studies (CLALS) and SIS’s Global Environmental Politics program. He teaches media production and theory and history. Several courses head into the field, including The Practice of Environmentalism: Galapagos and a summer session Classroom-in-the-Wild: Alaska, and a spring break CitW: Chesapeake Bay.

In pursuit of environmental, wildlife, and adventure stories, Engel has flown into hurricanes, been chased by tornadoes, and dropped into ice caves. He’s fled wildfires, gotten lost in jungles, overheated in Antarctica, and spent three years traveling the globe to come face to face with a lot of mummies.

Larry Engel is a member of:

• the Directors Guild of America (DGA)

His most recent production, Who Speaks for Nature?, premiered at the DC Environmental Film Festival in March, 2019, and screened at the Latino San Francisco Film Festival. It was filmed entirely on a GoPro and an iPhone.