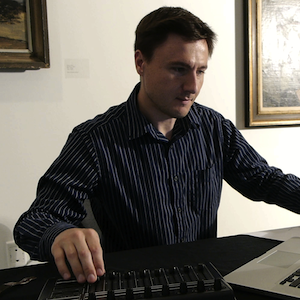 William Brent is a computer musician and Associate Professor of Audio Technology at American University in Washington DC. His creative work is spread across the areas of experimental music performance, sound art, and instrument design, and involves various combinations of human-robotic and computer-realized sound. In collaboration with internationally recognized composers and performers, he develops and operates real-time audiovisual manipulation software for intermedia performance works, such as James Dillon’s Nine Rivers, Steve Antosca’s HABITAT, and Philippe Manoury’s Jupiter, Pluton, and Neptune. In this capacity, he has presented work at venues such as SESC (Sa ̃o Paulo), Glasgow Concert Halls (Scotland), Miller Theatre (New York), and the National Gallery of Art (Washington, DC). He is a founding member of the INTERFERENCE New Music Collective, which performs in-residence at the American University Museum at the Katzen Arts Center.

As a programmer, he has developed open source software libraries for the Pure Data (Pd) programming environment that are used by an international community of artists and researchers. These include timbreID (a suite of tools for audio analysis and identification), DILib (which is geared toward facilitating the creation of novel digital musical instruments), and DRFX (a library of novel signal processing effects and utility classes). Using these tools, he has developed augmented reality digital musical instruments, such as the Open Shaper (controlled by shaping a virtual polygon with open-air fingertip movements), and the Gesturally Extended Piano—an extended instrument that exploits large-scale arm motions associated with standard piano technique in order to control real-time sound processing, spatialization, and synthesis. This work has been presented at major venues in the field of computer music, including the International Computer Music Conference, the International Conference on New Interfaces for Musical Expression, and the International Conference on Auditory Display. Software and further information can be accessed at www.williambrent.com.

Brent studied piano performance and composition at Wilfrid Laurier University and Mills College, earning Bachelor and Master of Arts degrees in Music. He holds a Ph.D in Music from the University of California, San Diego, where he studied in the computer music area with Miller Puckette, F.R. Moore, and Shlomo Dubnov. Centered on various understandings of timbre, his dissertation research examined signal processing techniques for automatic classification of percussion instruments, and the relationship between objective measurements and human judgments of percussive sounds.