In May 2013, the Finance & Investment Committee of the Board of Trustees created the Advisory Committee on Socially Responsible Investing (ACSRI). The purpose of the ACSRI is to advise the Finance & Investment Committee, through the Office of the CFO, VP, & Treasurer, about the ethical, social, and environmental considerations that might influence the management of the university’s endowment. The ACSRI comprises nine voting members, including four current student members (consisting of two undergraduates, one graduate student, and one law school student), three faculty members, one staff member, and one alumni member. The ACSRI also includes at least one administrator from the Office of Finance and Treasurer to facilitate meetings.

ACSRI Recommendation to the Board – May 2014

The ACSRI recommended that the board develop a comprehensive roadmap to divest from fossil fuels in the university’s endowment. The roadmap consisted of five steps:

The full recommendation to the Finance & Investment Committee can be viewed online.

Board Response to the ACSRI Recommendation – November 2014

After careful review of the ACSRI recommendation, discussion by board members, and analysis by the university’s investment advisor, the board concluded that divesting from fossil fuels could have an adverse effect on the university’s endowment performance, which would go against the University’s fiduciary duty. The board decided not to divest from fossil fuels, but to instead create a Fossil Free Fund that would provide donors an investment option within the endowment that excludes investment in oil, gas, and coal companies. The board’s full response can be viewed online.

Currently, the University has no investments in the Carbon Underground 200TM designated companies in any of its directly managed equity accounts.

American University incorporates sustainability into its campus culture.  The university demonstrates its values through its commitment to social responsibility, service, and an active pursuit of sustainability, as evidenced by:

As a result of its efforts, American University is ranked #1 for Energy on Sierra Club’s 2019 list of “Cool Schools.”

To learn more about American University's culture of sustainability, visit the Sustainability website.

In 2010, the university made a commitment to become Carbon Neutral by 2020.  In 2018, AU became the first urban campus and research university to achieve carbon neutrality – two years ahead of its goal. AU was able to achieve this accomplishment by improving its efficiencies on campus and within its buildings. Read more about AU’s carbon neutrality.

American University’s electricity comes from 100 percent renewable sources.  More than 50 percent of the university’s power is sourced from solar farms in North Carolina through its Capital Partners Solar Project initiative. The renewable energy project also provides solar power to George Washington University and George Washington University Hospital. At the time the project was completed, it was the largest solar power project constructed east of the Mississippi River. Additionally, the university has invested in solar panel installations throughout campus.

Read more about the energy project.

American University received the Airlie property as a gift in 2016. It has since made investments on the property to maximize its benefits for the university community. Airlie’s property offers a wide range of cross-disciplinary, experiential learning opportunities, as well as farm-to-table produce for main campus. Read more about AU at Airlie.

American University invests in projects that enable its students to excel in a sustainable environment.  Recent projects include a new underground heating system designed to maximize energy efficiency, and construction of the Hall of Science building which will be home to the biology, environmental sciences, chemistry, and neuroscience departments. Read more about current construction projects.

100 percent of electricity on campus is sourced from renewable energy. 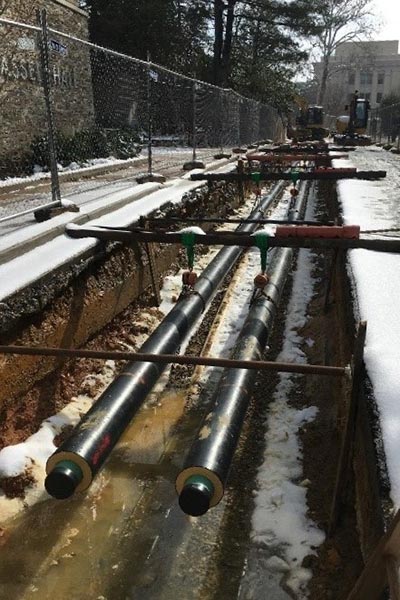