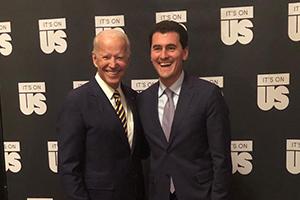 The Russian Tea Room is one of New York’s most iconic restaurants. A destination for celebrities and politicos across decades, it’s a place like no other, says Ken Biberaj, SPA/BA ’02. And he would know. In 2006, Ken helped reopen the hot spot with his uncle, a real estate developer.

Alongside his uncle, Ken spent much of 2005 deciding whether to reopen the RTR, as it’s known, or to develop the space for other uses. They ultimately decided there was just one choice – to reopen the place that is known in books, films, and social circles. Ken took a two-week class on how to open a restaurant at the Culinary Institute of America, and the rest, as they say, is history. “It’s such a special, iconic place,” says Ken, who went to law school at night and managed plans for the restaurant’s revival during the day.

It was a busy time to be sure, he says, but Ken was just as busy as an AU student. He served two terms as Student Government president and says the impact of that experience on his life cannot be overstated. From AU, he went to Harvard’s Kennedy School of Government, and he credits his “amazing” experience working in student government, coupled with internships on Capitol Hill, with his admission to Harvard. “No way I would have gotten into Harvard Kennedy School without that,” he says, without a shred of doubt. “Everyone took it so seriously,” he says of student government. “Everyone wanted to be involved.”

In 2013, Ken ran for City Council in New York. Ken says the election raised his profile, and shortly thereafter he was asked to chair the Manhattan Chamber of Commerce, which he did for several years. Under his leadership, the Chamber developed a new website, a new logo, and a new outlook, which included influential speakers from DC.

Ken returned to the DC area in 2017, where his work in real estate continues. At a company called Savills, he represents tenants looking for commercial office space. He loves the nuance in this region, saying things change fast for DC-based organizations, meaning they need more flexibility than the traditional market offers. “It’s an exciting market,” Ken says. And, as you might imagine, Ken has remained politically active on his return to the nation’s capital. In addition to his work at Savills, Ken is a leader with the Democratic Business Council of Northern Virginia.

He also keeps up ties to NYC. In fact, his successor as chair of the Manhattan Chamber of Commerce is fellow alumnus and AU Trustee Michael Kempner, SPA/BS ’81. Ken said leaving the Chamber was made easier knowing that a fellow AU Eagle would be taking the helm. “Not only had Michael and I gotten to know each other through business and politics,” he notes. “We had the very unique shared experience of both being AU alumni, something we talk about often.”