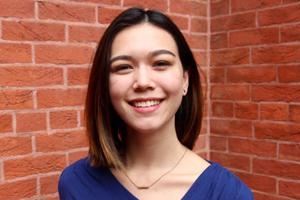 After Diana Knott earned almost all A’s in high school, she was warned: Don’t expect a repeat performance in college. People told her the work would be much harder, and she’d be unlikely to maintain such a stratospheric grade point average. She internalized those doubts and entered American University with a considerable dose of apprehension.

“My first year, I kind of freaked out and was convinced I was going to fail college,” she says now. “I just didn’t know what to expect.”

But Knott should never be underestimated, and she rose to the challenge at AU. Even after a medical scare during her first semester—more on that in a bit—she’s graduating this month with a near perfect 3.98 GPA. She’s earning dual degrees in international studies at the School of International Service and French Studies in the College of Arts and Sciences.

Toward the end of Knott’s first semester, doctors found a large ovarian cyst that caused ovarian torsion, cutting off blood flow to her ovary.

“Friends had their finals, so I took an Uber to Sibley [hospital] by myself. It was unexpected and scary; it was my first time far away from family and having major surgery,” she recalls. “I was told by the doctors that my ovary may have to be removed and that, though unlikely, the cyst could be cancerous.”

Ultimately, they didn’t need to remove the ovary, but conducted open surgery to remove the cyst and untwist the fallopian tube. Pre-surgery, she took one final on strong painkillers, but had to delay three exams until the spring and took a few incompletes.

Thankfully, Knott rebounded and pursued her goal of becoming fluent in another language. When she started taking French classes, she found the early period intimidating. But she came to appreciate the intensive French immersion, and World Languages and Cultures Hurst senior professorial lecturer Elizabeth Lang was a particular favorite.

“She was really good about speaking to us in only French, which is why I was scared. But that made me actually learn,” Knott recounts. “I studied abroad three times, and they were all in French-speaking countries. And she was very encouraging throughout that whole process.”

“She’s one of the most meticulous students I’ve had,” Lang says. “She’s just really intellectually curious, and one of the more memorable students in my lifetime of teaching.”

As an undergrad, Knott was brought into the Community-Based Research Scholars and the SIS Olson Scholars Program. She studied abroad in France, Morocco, and Senegal. Her time in France felt like an easier first step, living in the beautiful town of Grenoble in the foothills of the Alps. But she says she grew as a person studying in Morocco and Senegal, traveling to the latter country on a prestigious Boren scholarship. It was a national security program studying French and Wolof, the most common language in Senegal, and it was not for the faint of heart.

“We also studied the culture and regional issues. We had class and language practice from about 9:00 a.m. to 4:00 p.m. every weekday. It was a lot of class,” she says. “But it was a really great experience, and my host family was amazing.”

On top of all that, Knott co-led an Alternative Break in Northern Ireland. That was a formative experience, involving extensive itinerary planning and budget management. She raves about the trip and group of students who participated, and it led to one of her capstones. Knott did a comparative analysis of Northern Ireland, Bosnia-Herzegovina, and Lebanon—all places recovering from ethno-religious conflicts—and the role memorials play in continuing violence and reconciliation.

The Bosnia-Herzegovina memorials are now conciliatory, pointing toward healing, while Northern Ireland’s memorials and murals include violent images of masked gunman. (Lebanon showed a mixed picture.) Her conclusion? Popular sentiment in Northern Ireland, especially among protestant groups, is still skeptical—if not hostile—toward the 1998 Good Friday Agreement.

“There’s definitely still a tension there that feels very present,” she says. “And while some walls that divided communities were initially taken down, more have been put up since the agreement and, as a whole, they’ve actually grown taller.”

The paper is set to be published in the winter issue of the Yale Review of International Studies.

From Coast to Coast

Knott hails from San Jose, California, an area with a large immigrant population. Knott’s mother is ethnic Chinese but was born in war-torn Vietnam and fled a few years after the Fall of Saigon. She lived in a Hong Kong refugee camp before making it to the US and starting a family. Knott says her mom’s transition wasn’t easy, and they’ve at times had a difficult mother-daughter relationship.

“I think family trauma, or intergenerational trauma, has an effect,” she says. “With all immigrants, they generally raise their kids to have the life that they couldn’t have. But I feel like it is sort of intensified if you were a refugee.”

However, Knott says they’ve come to trust and understand each other more, and their relationship is now the best it’s ever been.

San Jose is also the largest city in Silicon Valley, and Knott was surrounded by aspiring high-tech innovators. In high school, though, Knott was on the speech and debate team, and she recalls intense arguments over hot-button issues like the Keystone Pipeline.

“I was on a team for congressional debate, and it forced me to research certain things and read the news—when I never would have otherwise. I think that was how I really learned that I had an interest in politics, and especially international affairs,” she says.

As much as she loved California, Knott harbored a desire to leave her comfort zone and see more. So she chose AU over University of California, Berkeley, and UCLA.

“I had lived in the same town my entire life, and I had a feeling that I would never leave if that’s where I went to college, too. And the world is too big to never leave.”

She was a dialogue co-facilitator with the Center for Diversity and Inclusion, chaired diversity/inclusion for her sorority Phi Mu, and explored these issues as Alt Break co-leader in Northern Ireland.

“For me, it’s a bigger question of how we create healthy societies, where we can talk about our issues and our differences,” she says. “To lead to a place, not just a negative peace where there’s no violence, but a positive peace where people are supported equally.”