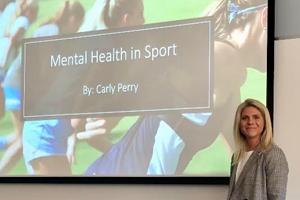 Carly Perry stood in front of Professor Trina Ulrich’s sports psychology students on October 23, guest lecturing a class she had taken only a few years earlier. She asked for a show of hands regarding knees.

“Do we have any ACL people in here?” Several hands shot up.

“Does anyone have a friend who has torn their ACL? A teammate?” Nearly two dozen hands reached skyward.

ACLs—anterior cruciate ligaments—are small knee ligaments that perform big jobs in athletic competitions. When a guard pivots and drives to the basket; a running back shimmies and reverses field to dodge a defender; or a forward dribbles, decelerates, and shoots from the edge of the 18-yard box, the ACLs are hard at work, regulating motion and stabilizing the knees.

Tearing one means navigating a six-plus-month slog back to full activity and carrying the emotional burden of missing time with teammates.

For her final research project as a sport and exercise psychology master’s student at Loughborough University in England, Perry, a former midfielder on the AU women’s soccer team, examined that experience, establishing a link between serious knee injuries and eating disorders among female soccer players. While body image issues and eating disorders have been researched extensively in aesthetic sports like dance and gymnastics, Perry was surprised by the dearth of studies on their prevalence in sports like soccer, and in the context of serious but common injuries.

“We know that over 50 percent of athletes are going to have a serious injury at some point,” said Perry, who begins her PhD program in sports psychology at the University of Central Lancashire in January. “The longer they’re playing and the higher competitive level they’re getting to, there are more chances that they’re going to get hurt. [When it does happen] part of your identity is taken away. You’re entering this physical and mental place that you’ve never been in. Your whole identity is centered on moving and your ability to be an athlete. You’re unable to move, so you think, ‘How am I an athlete?’”

The project required Perry to interview 13 former NCAA Division I and English semiprofessional women’s soccer players, many of whom were discussing their eating disorders with another person for the first time. “It’s so nice to talk to someone who gets it,” Perry recalled some of her subjects saying.

Trust and understanding are critical in psychology. For Perry, that comes, in part, from shared experience.

‘A SHELL OF YOURSELF’

Even as a young soccer player, Perry made a name for herself in tiny Mahtomedi, Minnesota, making the town’s varsity soccer team as an eighth grader and attending camps for Division I college programs.

“I know this sounds ridiculous,” she said with a laugh, “but that was probably the peak of my career.”

Perry tore her left ACL at age 13, and reinjured the same ligament a year later, when it was discovered that her initial surgery was performed incorrectly. The back-to-back blows cost Perry two years of developmental soccer. Cut from her prestigious club team, she bootstrapped her way to a college scholarship, guest playing in club tournaments and taking extra time for physical therapy and to prepare her body before practices.

Gradually, she regained confidence in her knees and her game, arriving for her freshman season at Manhattan College in the Bronx in good spirits and form and determined to leave her injuries in the rearview. She excelled as a rookie midfielder for the Jaspers, averaging more than 60 minutes a game, but took a knock to the knee in the season finale, sustaining yet another injury that would require surgery.

Recovery from scope surgery—after years climbing the ladder back to peak production and fitness—struck a significant blow, and a lingering anxiety and sadness started to blanket everything, from injury rehab to quick trips to the convenience store. She lost 30 pounds, a dramatic change that alarmed those around her when she returned home for summer.

“My parents were like, ‘Whoa, you’re a shell of yourself, something’s wrong.’ And I was like, ‘Yeah, I’m not happy,’” Perry said. “I just kept working out because that was the thing that made me happy, right? It just kept getting worse and worse and worse.”

Perry stayed close to home for a year at the University of St. Thomas in St. Paul. Then, feeling her Division I playing days weren’t quite done, transferred to AU, where she became interested in pursuing a career in sports psychology and helping athletes like her who were suffering.

She encountered during her first year of college a life-altering problem, but also a support network of family and others that sprang into action when needed.

“I was really lucky to have had a psychologist, dietician, strength trainer, sports doctor, physical therapist, and friends that supplied a lot of love in ways that I didn’t know I needed,” Perry said. “You’re not well, and so to have people around that were so patient and kind and encouraging was just amazing.”

A three-year PhD program at Central Lancashire will allow Perry to dig even deeper into mental health and women’s soccer, with a specific focus on English players. She eventually hopes to teach and work with female athletes—and to help end the stigma around mental health issues in sports.

Her own sporting experience has allowed her to connect with her younger brother Eddie, a soccer player at DePaul and a member of the US Deaf Men’s National Team; make friends; learn important life skills like teamwork; and find a career path. It also caused her tremendous physical and emotional pain when injuries sidetracked her career. Although she suffered a third torn ACL—this one in her right knee—while playing soccer in grad school last fall, she feels more at peace. Her career goals have changed, though she has a hunch she won’t be able to stay off the field forever.

What Perry hopes to get across in her field, and what she tells anyone who will listen, is that we can applaud performance without creating an environment in which student-athletes and professionals question their self-worth when they’re unable to compete.

“We can start by asking people how they’re doing. Yes, athletes can grow and develop and become more resilient, but they can also grow [with] a warm hug,” Perry said. “They don’t need try to grow in an environment where they’re feeling anxiety and depression.”

Since her study, Perry has stayed in contact with a handful of her subjects and has enjoyed hearing about the progress they’ve made in their mental well-being. It’s fitting that she’s now a researcher who’s driven to “help other humans to thrive.” Perry was always a strong soccer player, but an even better teammate.