Day in the Life of a Linguist 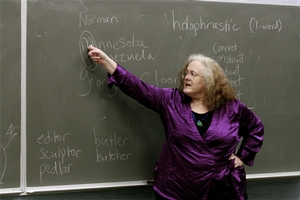 Department of World Languages and Cultures Linguist in Residence Robin Barr always has linguistics on her mind. Barr holds a PhD in linguistics from Harvard, with concentrations in both Indo-European and psycholinguistics. Her research on morphology involves the relationship between language learning and language change, and she is always happy to hear of new irregular verbs or refinements for wug-tests. Below is an account of her day on Thursday, September 5.

7:30 a.m.
Breakfast at Plato's Diner in College Park. Mmmmm, waffles with a side of linguistics. Discussed the role of the internet in false etymologies. For example, if you Google "Vatican Cameos," you will find that it was used in Season Two of the BBC drama "Sherlock" as a code phrase for "Hit the deck!" You will also find many references to its use by British forces in WWII, on sites such as Urban Dictionary. It turns out, however, that all the claims about a WWII origin of this phrase are dated after the "Sherlock" episode aired, and can be traced to a single authoritative-sounding (but completely invented) comment on a fan forum. In fact, the phrase comes instead from Conan Doyle's original 'Hound of the Baskervilles' story, where Sherlock Holmes refers in passing to the affair of the Vatican Cameos. Conclusion: Fake!

9:30 a.m.
Grading problem sets from Principles of Linguistics. Let's see – since this is the first problem set, I'll avoid using red pen because sometimes students freak out if their returned papers look as if they're bleeding....

2:00 p.m.
Head to AU for TESOL Program faculty meeting. Very exciting! I meet the new professors and realize we are getting close to a critical mass of linguists in the program. Today – TESOL, tomorrow – the world! We share course information and exercises, and discuss exciting developments in on-line courses. Talking shop is so much fun; I rarely get to see my colleagues since my class meets on Tuesdays and I don't ordinarily overlap with anyone.

4:00 p.m.
Hang out in my office, working on updating the Workbook for my class. I was unpleasantly surprised earlier when I discovered that the main text for my course had come out in a new edition in which the main difference from the old edition was that all the chapter and exercise numbers had been changed. Randomly. So now I'm trying to coordinate my assignments with the new edition.

4:30 p.m.
Several students stop by to discuss the class and ask questions about the readings. I've got a great bunch of students this term – very interested and enthusiastic!

5:15 p.m.
Some undergraduate students meet with me to find out what other linguistics courses are available, and how to go about creating their own minor in linguistics. We also discuss applying to graduate schools, and internships and careers in linguistics.

6:00 p.m.
More shop talk with other professors. I stick up for my Chicago accent.

7:00 p.m.
Finally finish revising my Workbook and leave it for copying. Head home.

8:00 p.m.
Sign up to present again at Fulbright FLTA meeting in December – I will have to order more kazoos. I think I can safely say that my presentations are the noisiest: imagine 75 or so Fulbright fellows singing, marching, clapping, and playing kazoos as they learn about psycholinguistic tricks for teaching pronunciation.

8:30 p.m.
Don my other hat as instructor at the Washington Literacy Council, and work on getting certified as a Wilson method trainer.

10:00 p.m.
Put on yet a third hat to work on season programming for two of my orchestras: Trinity Chamber Orchestra and Montgomery Symphony Orchestra. Looking for: Czech composers, music about Shakespeare, with harp. Eureka! Erich Wolfgang Korngold wrote a suite for "As You Like It," and I think I hear a harp. Now to find out where we can get the score and parts.

And so to bed.