Politics of the Plate: New Sine Fellow Wants You to Understand Food Systems and Policy 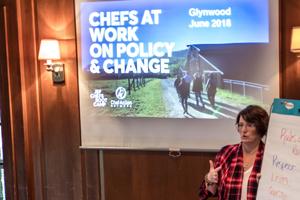 Katherine Miller is an incoming fellow at American University’s Sine Institute of Policy & Politics. She’s an award-winning communications executive and advocate for the culinary community, with the goal of creating a sustainable food system for all. Miller is currently the vice president of impact at the James Beard Foundation, and she was previously the founding executive director of the Chef Action Network, a nonprofit that helped chefs develop their advocacy skills and leadership voices. Miller spent the early part of her career as a campaign strategist and organizer, but she never saw her transition to food advocacy as a drastic change. As she makes clear in her interview with University Communications and Marketing, food is political. But it doesn’t have to be partisan, and she’s hoping to bring that collaborative spirit to the nonpartisan Sine Institute. This conversation has been edited for clarity.

UCM: Why did you want to do this Sine Institute fellowship?

Miller: The reason that I was really interested in it is the intersection of politics, policy, advocacy, and food. Food is one of the most political topics that we can get into, and AU and the Sine Institute are very much known for work in all different fields of politics and policy. So it seemed like a perfect fit.

Miller: We typically just look at food through the nourishment lens, but in reality it’s an entire economic system that can be politicized. So when an administration decides to crack down on the Supplemental Nutrition Assistance Program (SNAP), that is a political decision. It has ramifications related to our most vulnerable citizens. And when we change the way we provide subsidies or insurance for crops, that’s a decision that’s made at the policy level. It’s not made at the economic level. It’s literally made in the halls of Congress. Our food system is actually controlled by our policymakers, and our policymakers are controlled by politics. So by choosing what we grow, how we grow it, those actions sort of feed the system, pun intended.

UCM: Since you’re going to be working at the Sine Institute, do you think there are bipartisan ways to promote healthy food access?

Miller: Absolutely. The good thing is that while food is political, it’s not necessarily partisan. One of the greatest bipartisan coalitions to protect our food system was built around the Farm Bill. Urban lawmakers always want to protect and support feeding programs for those in need, and rural lawmakers traditionally work to support their agricultural constituents. Food is not partisan, and that is a very important distinction to make. Food is political, but it also has a unique ability to bring people together to find common ground. Everybody will come around the table to have a delicious meal and have a discussion, right?

UCM: What have you learned from high-profile, celebrity chefs?

Miller: Chefs are pretty unique in their ability to get things done. Every day, they solve a million little problems. That’s what you see when somebody like José Andrés jumps right into an international disaster situation. They can figure out how to feed tens of thousands of people meals in the time that it takes some people to figure out how to get the plane off the tarmac. Tom Colicchio saw a vacuum. There were no scorecards, and there was no one tracking food policy legislation. He said, ‘Oh, I can fix this. I can make this possible.’ What I love about working with the chef and restaurant community is seeing their ability to get stuff done, and their ability to do that thoughtfully. They are always balancing the fine line between how they use their personal voice and their brand, and how they interact with customers. They’re constantly problem solving, and they have to do that largely through consensus and collaboration. The chef doesn’t just feed 200 people. They need a team.

Miller: I grew up in the Panhandle of Florida, in a small town called Niceville. I went to college at Loyola University New Orleans.

UCM: During those early years, did you have any favorite foods? I’m just curious about the development of your appreciation of food.

Miller: I probably grew up like any other southern kid on the Gulf Coast, eating shrimp and oysters and gulf snapper. In the ‘90s, my family bought a restaurant on the Gulf Coast of Florida. It was called the Old Post Office, and it was sort of a Gulf Italian menu. My family spent a lot of time in Italy, and they wanted a lot of those fresh seafood dishes and fresh pasta dishes, and you couldn’t really get those in that area at the time. But I was just a really bad waitress (laughs). I was probably like most Americans and most people, not thinking about the politics on my plate. That’s why I’m so excited about this fellowship—to have those conversations with students about these issues. If you are choosing out-of-season or out-of-region food options, then you actually have to look at the food system in which they were created. Immigrant labor. Subminimum wage. So, it’s what we support with our dollars.

UCM: So you worked in politics when you first came to DC. At what point did you decide to cross over into food advocacy?

Miller: I went from working in politics to working in the corporate world for a number of years. Then I went into the nonprofit world. I crossed over into food when I had my own company, and a large part of that was training advocates around the world to use their voice. I was working on projects for the National Democratic Institute, the Bill & Melinda Gates Foundation, and others. And the James Beard Foundation hired me to create this program, the Chef’s Boot Camp for Policy and Change. They had this idea, and I took all my political skills and brought them to bear on this advocacy training for chefs.

UCM: Have there been any career moments you’ve been especially proud of?

Miller: I’ve been really lucky in my career. When I was at the United Nations Foundation, I helped launch an anti-malaria effort called Nothing But Nets. I’m a founding board member of RAINN, the national sexual assault hotline. I’ve been really lucky to get a couple recognitions for food-related work, and I’ve worked all over the world. I’m definitely a small-town girl done good.

Miller: Sure. My husband’s our family chef, and I’m the baker and the pastry chef, so I’ve spent a lot of time perfecting my bread recipes and my French macaron recipes. And a lot of cakes and cookies. But probably my biggest obsession, at the moment, is bread.

UCM: There seem to be a proliferation of cooking TV shows. What can we learn from watching amateur chefs, or real gourmet chefs, on TV?

Miller: We know that food media is the thing that we like to share most on social media. More than half of shared headlines on social have something to do with food. With cooking shows, I think you can learn a great sense of America. People can make fun of Guy Fieri all day, but he introduces you to great food in bowling alleys and amazing food in diners. These American entrepreneurs—not just celebrity chefs—are making it work every day. With food media on television, whether it’s The Great British Baking Show or Top Chef or Chopped, they all share something in common: They’re showcasing people who can look at a set of ingredients and tell you how to make something delicious. And they can do that while still being pleasant.

UCM: Have you thought about any advice you’d have for AU students about food?

Miller: One of the biggest things I want is for people to be more mindful eaters. Not just the health aspect of it, but also the politics of the plate. I want them to be more conscious consumers of the food that they purchase. Whether it’s about sustainable seafood, or whether it’s the high-end meal that they’ve saved up for. Food is certainly a choice that you make with your dollars, but it’s also a choice that resonates at the ballot box.